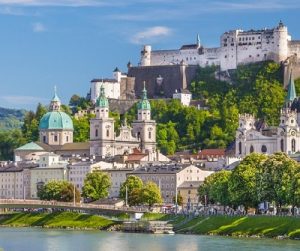 Six members of Furman University’s class of 2020 have received Fulbright U.S. Student Program grants from the U.S. Department of State and the J. William Fulbright Foreign Scholarship Board. This is the most Fulbright recipients Furman has had in any single year.

“Our strong German studies program and mentoring by Ilka Rasch (associate professor in the Department of Modern Languages and Literatures) have been a significant element in our Fulbright successes for many years,” says Scott Henderson, director of Furman’s National and International Scholars program. “Furman applicants go through significant vetting and preparation, more so than applicants get at larger universities, but even more attention than applicants receive at many other liberal arts and sciences colleges. This is part of what we mean by The Furman Advantage.”

Rasch says the success of Furman students in the Fulbright program is due to the university’s “strong focus on interdisciplinary mentoring, internships, transferable global competencies and our full-immersion, semester-long study abroad program at the Freie Universität Berlin, one of Germany’s best universities.”

The new graduates will teach, conduct research and provide expertise abroad. Due to COVID-19, grants are postponed until January 2021. Students typically serve a 10-month stint overseas.

Including this year’s recipients, 44 Furman students have received Fulbright Student Program Grants, starting with William King and Dan Wages in 1949. King went to France and Wages to the United Kingdom. The Fulbright Program is the U.S. government’s flagship international educational exchange program and is designed to build lasting connections between the people of the United States and the people of other countries.

The Furman recipients are:

Nettie (“Smith”) Childs from Atlanta (Brookhaven), Georgia, a Spanish and sociology double major. She has been awarded a Fulbright teaching assistantship to Colombia, pending that government’s continued funding during the pandemic. Childs is the daughter of James and Natalie Childs.

Zachary (“Zach”) Hughes from Chesterfield, Missouri. An English major, Hughes has been awarded Furman’s first Fulbright teaching assistantship to India. He is the son of Thomas and Laura Hughes.

Emily Peeler from Mobile, Alabama, a German studies and math-economics double major. The daughter of David and Cindy Peeler, she has been awarded a Fulbright teaching assistantship to Germany.

Audrey Rotman from Ottawa Hills, Ohio. A communication and German studies major, Rotman has been awarded a teaching assistantship to Salzburg, Austria. Her parents are Phillip and Beth Rotman.

Harrison Weir from Fountain Inn, South Carolina. A German studies and politics and international affairs double major, Weir is the son of Erik and Robin Weir. He has been awarded a Fulbright teaching assistantship to Salzburg, Austria.

Samantha Whitley from Fort Mill, South Carolina. Whitley is a German studies and politics and international affairs double major. She has been awarded a Fulbright teaching assistantship to Germany. Her parents are William and Dawn Whitley.