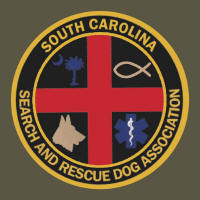 South Carolina Search & Rescue Dog Association (SCSARDA), a non-profit, all-volunteer professional search and rescue team dedicated to finding missing people with highly trained search dogs, has assisted in a search for two mass grave sites at the historic Revolutionary War battlefield of Hayes Station in southern Laurens County, south of Clinton. In 1781, Maj. William Cunningham and his British forces killed some 18 of American forces (militia men of the Little River District led by Col. Joseph Hayes) after their surrender, hacking their bodies into pieces. Some fourteen men were buried together in two common graves. Team SCSARDA was called out for assistance by Durant Ashmore, a battlefield preservationist and specialist on the Revolutionary War in South Carolina, and provided human remains detection (HRD) K9 teams to search a designated area and potentially narrow down sites for further exploration. A K9 team offered significant behavioral change in one small area of the site, and two K9 teams offered some behavioral change in another area of the site. Ashmore plans to bring in further resources for discovery of the two gravesites, including ground penetrating radar.

Handler Nancy Jocoy with German Shepherd K9 Beau is the team’s senior human remains detection expert; K9 Beau has attained the North American Police Work Dog Association (NAPWDA) cadaver detection certification seven times. The multi-day test includes searches for human remains in 12 different scenarios in six areas, including rubble (simulating a collapsed building), vehicles, water, open wilderness, building, and buried. Handler Mitch Henderson with the youngest K9 on the team, Labrador Penny, has trained in human remains detection for more than a year, and is pursuing NAPWDA certification in the Spring of 2021. Because this was neither a criminal search nor one involving a missing person, Team Penny was allowed to gain valuable experience by participating.

“Historical searches are ones that our team has a growing interest in,” said Nancy Jocoy. “Our typical emergency callouts, and our primary mission, is to serve as a 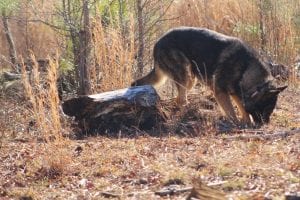 resource for sheriff, police, fire, or emergency management agencies in searches for missing persons. Our K9 SAR teams include area search, for searching wilderness areas in systematic sweeps while off-leash; trailing, for finding direction of travel and hasty searches of trails and paths; and human remains detection on land or water.”

“When we received a request for assistance from Durant, we realized that our team could provide a valuable resource to what was a very meaningful search. It is important that the burial sites and graves of our soldiers be recognized and honored as best we are able. More than two-hundred years ago some of South Carolina’s citizens were engaged in a fight for our country’s freedom, and they lost their lives doing so. Every family and community need to know where their loved ones are laid to rest so that their graves can be treated with dignity.”

“The Hayes Station battlefield site has been significant for me for quite some time,” said Durant Ashmore, “and I’ve been exploring resources that may help in discovering the location of the two mass graves. A K9 SAR team with highly specialized dogs is a helpful tool for us to gather more information about the site and narrow down options so that we can apply further resources.”

Initial K9 searches during the day were performed separately so that each handler did not approach the site with preconceived biases. After a short break, the team conferred on search strategy and returned to the site for further detailing and investigation on specific areas. GPS coordinates and search pattern map, along with a full report on search strategy, search conditions, potential outcomes, and areas for further exploration were delivered to Ashmore. A possible early morning search in the summer may take place later in the year.

Board members of the Laurens County Museum were also present for the search.

The South Carolina Search and Rescue Dog Association (SCSARDA) is an all-volunteer professional search and rescue team with highly trained search dogs dedicated to helping find those who are lost, from children to hikers to drowning victims to those with Alzheimer’s. Founded in 2002, SCSARDA is a non-profit 501(c)(3) organization which serves as a specialized resource for emergency services agencies. We respond to requests from emergency services agencies on a 24/7 basis and our services are provided entirely free of charge. For more information on SCSARDA visit http://www.scsarda.org or like https://www.facebook.com/SCSARDAK9.