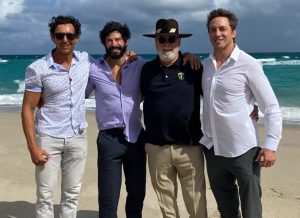 MIAMI, FLORIDA: South Carolina Floodwater Commission Chairman Tom Mullikin joined several fellow military veterans last week for a day of diving – not for play, but for work – as the veterans, all hailing from prior service in the various U.S. special operations forces, worked to restore and rebuild 100 yards of coral reef in approximately 35 feet of blue water south of Miami Beach.

The work was part of an ongoing project of FORCE BLUE, a somewhat unique non-profit co-founded in 2016 by Jim Ritterhoff, SCUBA Diving magazine’s “2019 Sea Hero of the Year;” U.S. Marine Staff Sgt. Rudy Reyes, best-known as the Recon Marine who played the role of himself in the HBO miniseries “Generation Kill;” and FORCE BLUE’s chief operating officer Keith Sahm, former general manager of Sunset House in the Cayman Islands.

“FORCE BLUE’s SOF veterans have that strong collaboration and teamwork which requires a mix of interpersonal, problem solving, and communication skills needed for a group to work together towards a common goal,” says Sahm. “For us, our strength is literally in the power of the team.”

FORCE BLUE’s latest project, 100 YARDS OF HOPE, is a yearlong undersea reef restoration effort and partnership between FORCE BLUE and the National Football League. According to FORCE BLUE’s website: “From Super Bowl LIV in Miami to Super Bowl LV in Tampa, 100 Yards of Hope will bring much needed attention to the plight of Florida’s Coral Reef — a national treasure of immense economic and environmental importance that could, if steps are not taken immediately, disappear in our lifetime.”

Among FORCE BLUE’s divers are members of the U.S. Army, Navy, Marine Corps, and Air Force special operators, as well as veterans of Great Britain’s Royal Navy and Marines.

Mullikin, a former U.S. Army officer and international legal officer with the 360th Civil Affairs Brigade (Airborne) who has since worked closely with U.S. special operators often leading them on mountaineering ventures and dive-work excursions, previously served as a special assistant to the Chief Prosecutor, Military Commissions, in the trial against the 9/11 terrorists. A retired two-star commanding general of the S.C. State Guard, Mullikin was tapped to head the S.C. Floodwater Commission by Gov. Henry McMaster in 2018.

Last month, FORCE BLUE appointed Mullikin to its board of directors and named him chief legal officer.

“There is no more rewarding work than what we are here doing with FORCE BLUE,” says Mullikin. “The SOF veterans of FORCE BLUE and the also-experienced divers from other organizations are building and rebuilding naturally growing coral reefs and in-so-doing attacking amplified global climate change and wave attenuation all the while enhancing our marine life. What we did last week off the coast of Florida, we’re going to soon be doing off the coast of South Carolina as we develop and train new SCUBA divers and citizen scientists here in the Palmetto State.”