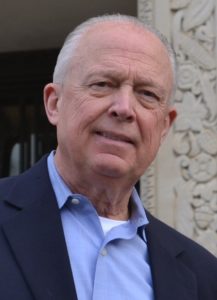 They’re a staple of the incumbent politician’s toolkit: the countless recognitions, resolutions, proclamations, ribbon-cuttings, and photo-ops which are more ceremonial than anything else, but which nonetheless pay dividends for elected officials.

Certainly, these ceremonial activities can be a good way to recognize someone’s good deeds or bring attention to a worthy cause. But as politicians are well-aware, they’re also a way to win favor with influential constituents or score points with campaign donors. Getting a picture with them in the local paper never hurts, either.

Of course, it could be argued that such recognitions consume time and energy that might better be spent on important public business.

One such practice in particular has proven to be a potential source of heartburn: the naming of roads, interchanges, and bridges after living people. I’d offer that it’s time to stop naming things after individuals who are still among us — including public officials.

The most obvious pitfall of naming things after current or former public officials who are still living is that they have yet to have their legacies fully cemented… which is to say, they still have the potential to bring controversy or disgrace upon themselves. Off the top of my head, I can think of three instances in recent years of state landmarks being renamed after their namesakes ran afoul of the law – such as a major expressway in the Upstate that was named for a former state comptroller and renamed following his conviction on securities fraud charges.

But then, a public official’s crimes aren’t always enough to overturn a road-naming honor. For example, in the Lowcountry a connector road leading to the Port of Charleston still bears the name of a former state Senator who in 2015 pleaded guilty to violating campaign ethics laws… which means many folks when heading to and from our state’s major port travel on an expressway named for an admitted lawbreaker.

Names on landmarks aren’t just superficial; they can cut to a community’s identity. In that regard, it’s inconceivable that a roadway honoring a lawbreaker does any good for an area’s self-image.

There are other pitfalls as well. There’s the cost, both in terms of the time and energy spent on naming things, and in terms of the cost of signage. Speaking of which, it’s hard to believe those little green signs are really the best way to honor someone anyway.

We should probably change altogether the way roads, bridges, and other landmarks are named. Currently, more than 1,000 state roadways bear the names of individuals. Most are named by the General Assembly, with some being named by the state Department of Transportation commission – which explains the heavy focus on government officials. There has to be a better way.

Maybe the answer is to take naming out of the hands of the Legislature and the DOT and leave it up to community-based citizen committees. That’s how schools are named, and it seems to work well.

Or perhaps there ought to be a standardized criteria for naming things, with an emphasis on genuine heroes like fallen soldiers or peace officers. We’d run out of things to name long before we run out of people whose sacrifices are worthy of tribute.

What’s clear is that it’s time to stop naming things after still-living public officials, or even anybody still living. Waiting until after someone passes would allow time for that person’s legacy to be properly assessed.

Besides, no public official who is actually worthy of such a tribute would want a road, interchange, or bridge named after them anyway; the opportunity to serve the public would be enough of an honor in itself. If not, a nice plaque ought to do.