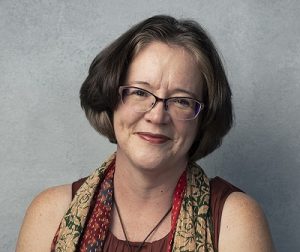 Joni Tevis, the Bennette E. Geer Professor of English at Furman University, has won her second Pushcart Prize, this time for an essay published in The Georgia Review titled “If Your Dreams Don’t Scare You,” a tour through history of hazing experiences, including her own.

The Pushcart Prizes award the best poetry, short fiction and essays published in smaller literary journals and magazines in the United States. Tevis’s essay will appear with other winners in The Pushcart Prize XLVII: Best of the Small Presses 2023 edition, available Nov. 15, 2022.

“Joni Tevis writes insightfully about the social dynamics that lead to abusive hazing rituals and the consequences for victims’ lives,” said C.J. Bartunek, managing editor of The Georgia Review. “In the process, she takes readers into the hidden worlds of some fascinating subcultures, from elite college marching bands to the bizarre traditions of 19th-century secret societies to the 1950s space race, in which ambitious participants must determine how far they are willing to go to succeed. ‘If Your Dreams Don’t Scare You’ is an unforgettable essay, which we were proud to publish.”

“If Your Dreams Don’t Scare You” centers around Tevis’s experience as a member of the marching band at Florida State University, where she earned her bachelor’s degree.

“One thing I’m really happy about is the community that writing and publishing this essay has allowed me to build,” Tevis said. “I wrote this from a place of sorrow, of losing the community that marching band had been for me. For me, being hazed in this way was a radically alone-making thing—I didn’t talk about it, not with the others who had been through it, and not with friends or family back home. When I finally started to write about it, after many years, I didn’t realize the loneliness that I still carried with me, like a scar this experience caused me to have.”

Working with Bartunek, Tevis said, helped her “shape the piece into something that wasn’t just for me, but was for other people, other readers. After the piece’s publication, I’ve heard from other band members who’ve reached out to connect with me about this material. I’m so thankful for that. This is what I want my writing to do: to help us feel less alone, to help build communities.

“This essay means a lot to me, not only because it was so hard to write, but because it allowed me the great gift of writing my way into a new community. I’m so honored that it will be reprinted in the Pushcart Prize anthology, finding its way to new readers,” Tevis said.

Tevis’s first Pushcart-winning essay, “What the Body Knows,” was published in the 2015 edition of the compendium. Her first collection of essays, “The Wet Collection: A Field Guide to Iridescence and Memory,” was published in 2007. Her second, “The World Is On Fire,” was a Kirkus Best Book of 2015. Tevis’s writing has also appeared in The Oxford American, Shenandoah, Conjunctions, AGNI, The Bellingham Review, North Dakota Quarterly and Barrelhouse. She earned an M.F.A. and a Ph.D. from the University of Houston. She joined Furman’s faculty in 2008.