Faint, yet menacing, came the sound. I stood as still as the stones around me and listened. From woods northeast it came again. Coyotes. Well, it seemed fitting that their ghostly yelps and cries come to me. I was standing in periwinkle and close to the midst of what was once a fine plantation home, Badwell Plantation. The Reverend Jean Louis Gibert owned it. He died when he ate a poisonous mushroom.

Now I don’t know if he died on the site where I stood but perhaps death’s chill brought him to the fireplace, the one whose reddish brick remnants a tree has fallen across. I saw too a beautiful old well, lined with mossy rocks and attended by loose bricks. Very narrow this old well. Was it a bad well? Is that the source of the name for this old plantation? Did the Reverend take his last sip from that well? Old places like this raise many a question. 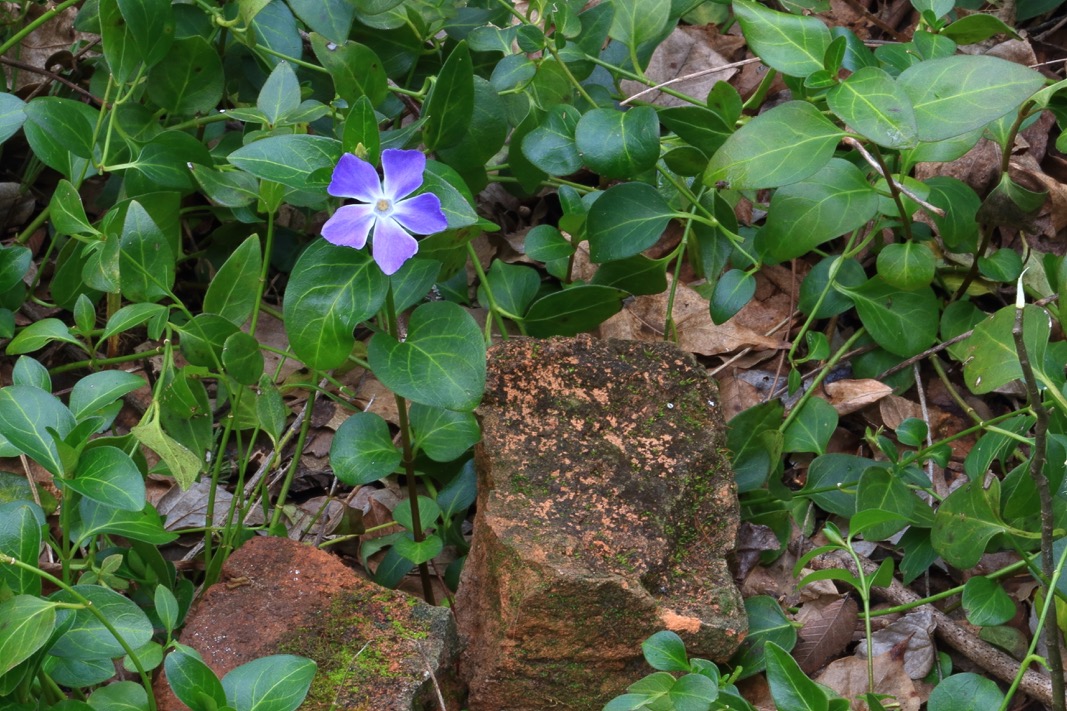 Blocks of stone rise from the periwinkle. The Huguenots who came here made good use of stone. The cemetery with its stone fortress of a wall I’ve seen many times, and the springhouse of stone blocks I’ve been to also. It’s the sole surviving structure here. Now, I’ve visited the site of the home where the Reverend lived. This site completes my Badwell Trilogy of cemetery, springhouse, and plantation ruins.

The trees on the homesite seem different than the surrounding woods. They lean and twist into surreal images. Winter’s pale cold hand gives them a ghostly aura, which fits well with the haunting whines and yelps of coyotes and death by poisonous mushroom. 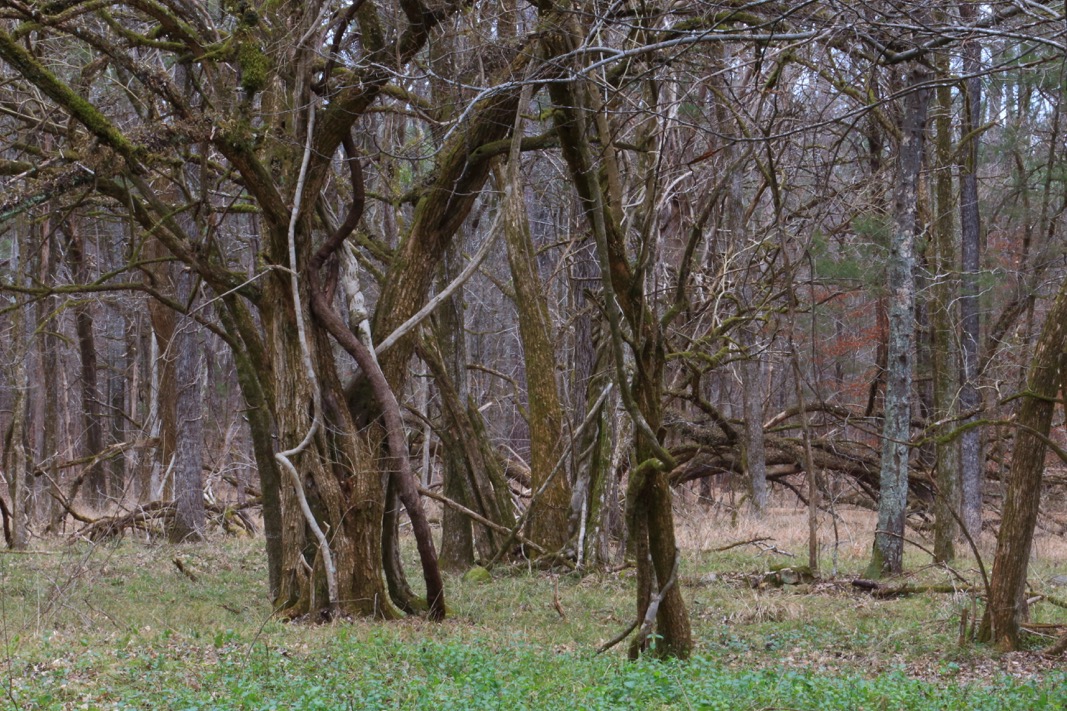 A fire destroyed the house in the 1920s but you won’t see any evidence of fire. Lush tangles of periwinkle, the cemetery flower, cover everything. I saw too garlic, yucca, and daffodils. Not only those but Osage orange and walnuts too. My guess is the Reverend and his family planted them and although they’ve been gone a long time, as has his grandson, James Louis Petigru, who later took over the plantation, the plants live on. We should be so lucky.

Yes, Gibert’s grandson, James Louis Petigru, inherited the plantation and he took great pains to improve the property. Jane Petigru North, a widow, ran the plantation for her brother, James, while he ran his law practice in Charleston. Jane led a solitary life at Badwell Plantation, and solitary is the word I choose to describe this old homesite. 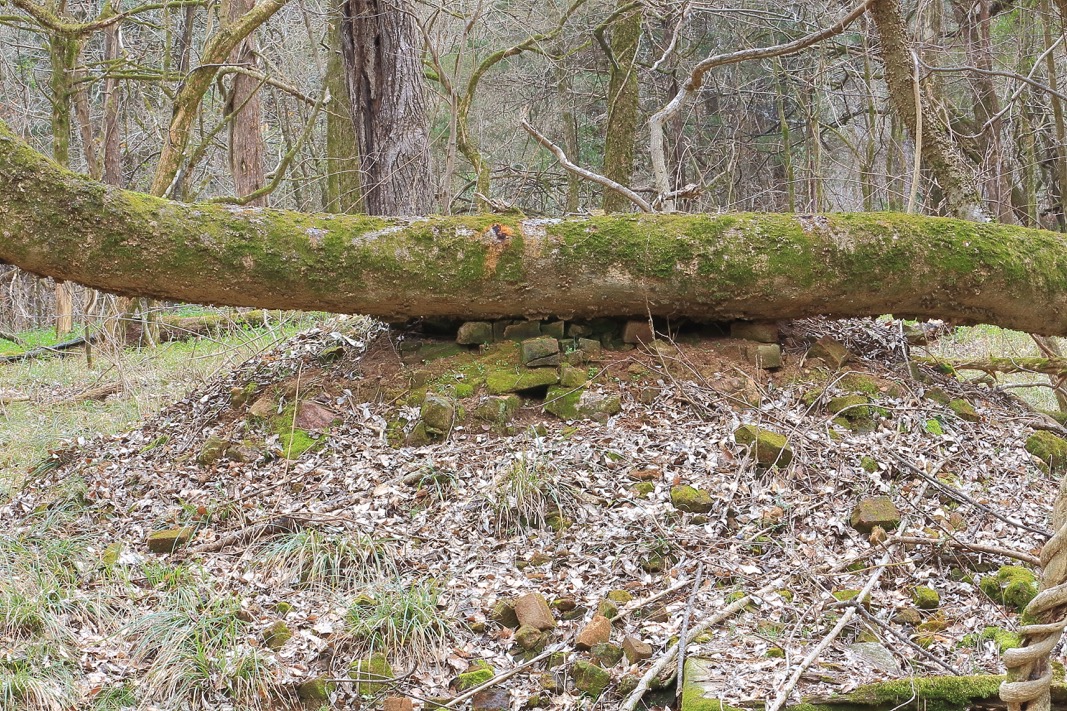 I go to many forsaken homeplaces. None give me the feeling this place does with its stones, handmade brick, and ghostly trees. You get the feeling spirits flit from tree to tree watching you. All that sounds Druid-like I know, and it should, for this place once had a mile-long avenue of oaks leading to it. James planted them. It’s believed he named each tree for a friend. The area is part of Sumter National Forest and the trees were cut so that pines could replace them. What a shame.

But again, the name Badwell Plantation? Rumor has it that the water was bad here. Well, no worry the Savannah River and Little River were close by as was Buffalo Creek.

Badwell. If you go, look for the dense green clumps of garlic. Pick a leaf and rub it between your fingers. Today as in the 1760s the fragrance is unmistakable. And look for periwinkle blooms and old bricks. Europeans brought it here as a common ground cover in cemeteries. That fits too. When you stand on the site of the plantation home you stand in a large grave of sorts. Lives that were here are dead and gone. They sleep in woods to the northeast a short distance away. The same woods where the coyotes sent up their ghostly wails into the winter air.