If my mother didn’t like something, she’d tell you. If she liked something, you knew that too, and she liked the Civilian Conservation Corps, Franklin Delano Roosevelt’s “Tree Army.” That arboreal moniker resulted from the CCC’s efforts to plant trees, build and improve national and state parks, prevent erosion, control flooding, and help with natural disasters.

My mother liked FDR, who didn’t back in the day, but she had another reason for liking his CCC. It put her brothers to work. She grew up with CCC tales and memories. Born as she was in 1928, my mother grew up in the Depression. She would be eleven when the Great Depression ended in 1939. I say she would be, well she was, and when black Tuesday struck October 29, 1929, a hard rain fell as Dylan sang. And it rained and rained. Splattering out of existence among the big black drops of rain were jobs. Yes, jobs dried up even as it rained. Unemployment rose to 23 percent in the United States.

And so, FDR’s CCC took wing March 31, 1933. Its goal was to recruit unemployed men and later out-of-work veterans and put them to work. I don’t recall which projects Mom’s brothers worked on but I know the men worked with two things I love: rocks and trees. To see stacked stone winding with grace along the border of a mountain road is a wonderful thing. To drive the winding Blue Ridge Parkway restores the soul.

After a day on the Chattooga River a handful of years ago, I made a side trip to the Walhalla Fish Hatchery. There, firsthand, I saw the beauty of CCC stonemasons. Constructed from rocks quarried onsite, the hatchery is a thing of beauty and it’s South Carolina’s only cold-water hatchery. 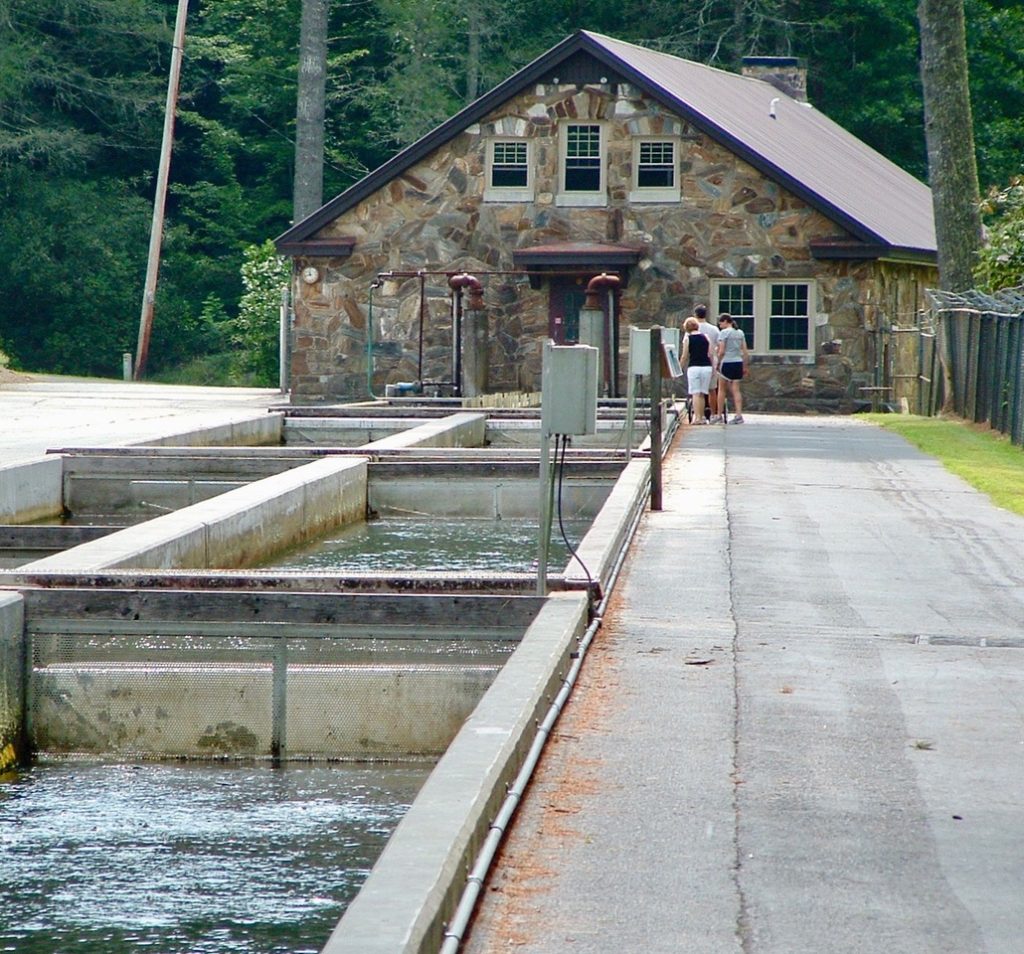 The handsome stone Walhalla Fish Hatchery, open to the public.

In Georgia, among others the CCC built the A.H Stephens State Park, which your author went to as a boy in the 4-H club. The CCC built Georgia Kolomoki Mounds and Little Ocmulgee state parks.

In North Carolina, men in the CCC worked in the Pisgah Forest, a family destination when I was a boy. CCC men brought beauty and function to the Nantahala Forest and the Great Smoky Mountains, another boyhood destination. And Mount Mitchell, a cold place to be come winter with its 6,684-feet elevation. I recall being there in snow. The CCC, part of FDR’s New Deal, planted three billion trees plus, built shelters and trails in more than 800 parks across the country, and in so doing shaped today’s popular national and state parks.

Though a civilian organization, the Army ran CCC camps and their mess halls. Tightly made beds had to bounce a quarter off them, and reveille roused workers. Taps signified sleep.

We’re closing in on ninety years since the CCC and its Tree Army did good things. To this day I know people who recall their dad’s working there. Some built barracks for the men. Some planted trees. Some cooked for the men, a voracious army. Some worked with stone, and to this day brook, brown, and rainbow trout make their way from the shadows of a stone building into streams, then creels. CCC men were making memories, though they may haven’t realized it.

Men needed work and they heeded the call. Some brought trumpets. Some brought fiddles and banjoes. Mayhaps a dulcimer or dulci-more came too and some brought their dogs as loyal company mascots. A spark of hope and accomplishment during a dark time, the flame still burns.