August 2015, the second week of school.  Something was wrong with my dog. At first, I thought Bruzer was pouting because he was by himself all day. His vet brushed it off.

The next morning I was surprised not to find Bruzer in the bed with me. When I came home late, he was in the same spot and hadn’t touched his food or water.

I called the school secretary and booked a substitute. I sent my boss an e-mail and hoped he was an animal lover. I called a friend and asked for the name of the best vet in Columbia.

At first the vet at Shandon Wood Animal Clinic thought Bruzer had been hit by a car, but I knew that was impossible. The how-it-happened really didn’t matter. My dog had a serious back injury. They gave him fluids and pain meds and kept him for observation.  I sat beside Bruzer’s crate on my lunch breaks, and then my daughter and I would go after school and stay until closing. The day finally came when I thought I was taking him home, but instead the thing they warned me about happened. He lost the use of his back legs. They call it going down. The vet came in and explained my options. I should have stopped her as soon as I heard the word “neurosurgeon,” but I didn’t.  If there was a chance to fix my dog, I had to try. The tech called ahead to the specialty hospital to let them know I was on the way, and I called school to say I wouldn’t be back that afternoon. I said a prayer that my new boss would understand.

I’ll never forget Bruzer’s face as we drove to Harbison. He was scared. I was, too. I told him he was not allowed to leave me. I explained it all in great detail, and I swear he understood every word. I told him I couldn’t lose my husband and my dog, and there was no way I was telling my daughter that her dog was gone. I expected him to commit to a six-year contract, minimum, enough time to get my child through school.

I made it through Malfunction Junction and carried my dog inside and sat on a bench and prayed. Hard. He had lost control of his bladder and bowels. My clothes were covered in mess.  Messed up dog.  Messed up clothes.  Messed up life. 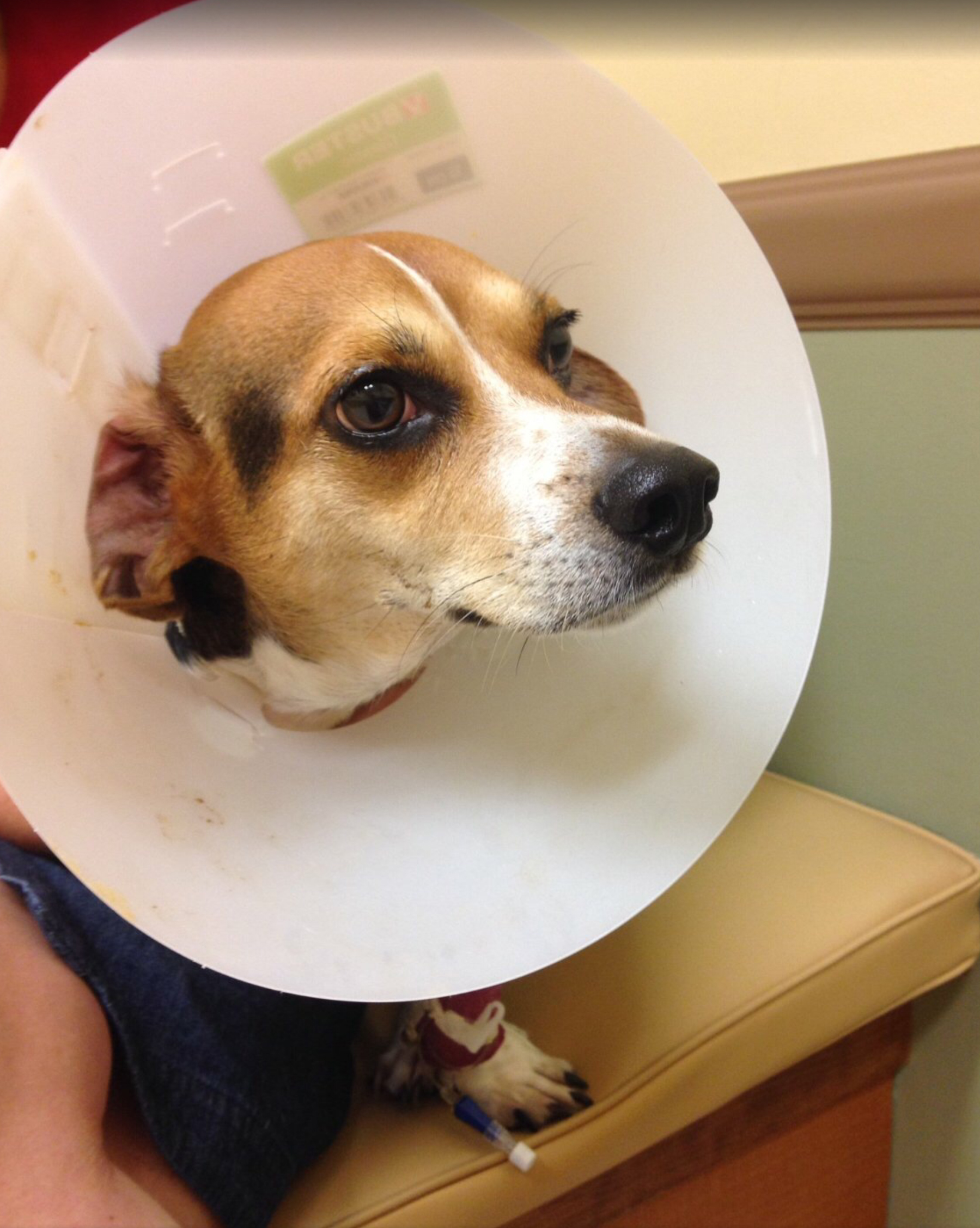 First, we needed an MRI to see if Bruzer qualified for surgery. They needed payment up front, and it was far more than expected. My ex-husband was always the fixer, always the one who knew exactly what to do.  I hated being in charge, but this was for me to figure out.  We were separated, but not divorced so there were no joint accounts or credit cards. There was no emergency fund because our lives had been the emergency. I didn’t have time for a traditional loan.  I knew my school did payroll advances for emergency situations.  Asking to borrow money seemed impossible, but I knew I could save face, or I could save my dog. I had to choose between my pride or my sweet pup.

I drove to the bank and then back out to Harbison and handed over hundred-dollar bills like a drug dealer.

According to the scan, Bruzer was a candidate for surgery, but again, they needed the money up front.  I was wiping the mess off the floor and trying to figure out what to do.  When my wedding ring got caught in the terry cloth, I had my answer.

It was 8:27 that night when Dr. Draper called to say the surgery went perfectly.  He needed time at the hospital to recuperate.  We visited every day, and each time, I reminded him of our deal. Now that he was worth more than my car, I amended his contract to ten years, not six.  The techs showed us how to use a sling to help him walk while he recovered.  They said it would probably take about six weeks. 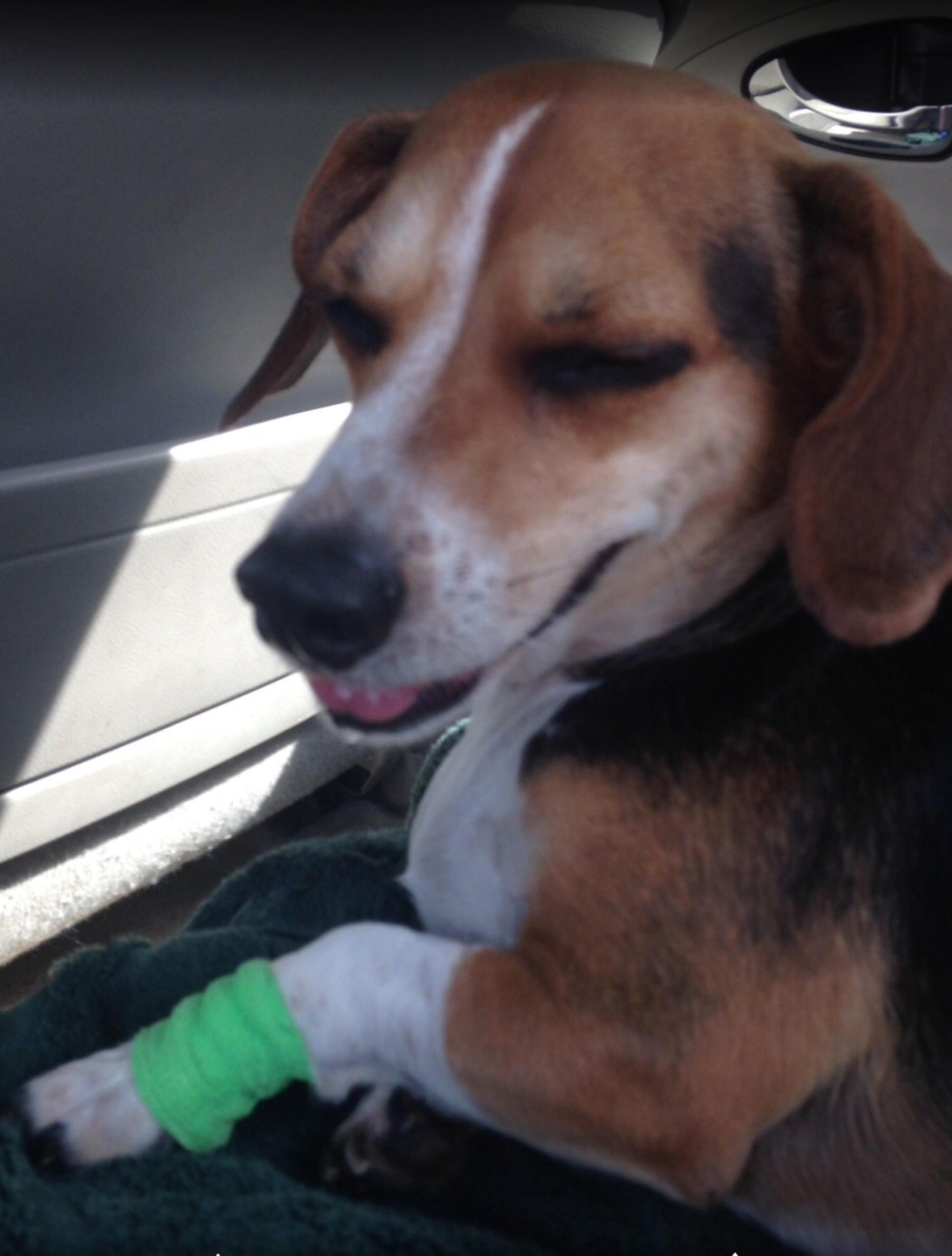 Every class is special for a different reason. I thought I would remember that year’s class as the kids I taught the year Bruzer got hurt and almost died. I had no idea what was heading my way.

October 4, 2015. The flood hit. My daughter carried a trash bag with our belongings over her head, and I carried the dog as we walked through almost five feet of water.  As we walked into a neighbor’s house with the dog and the trash bag, I realized I had forgotten his sling. Time for another heart to heart chat with the big dog. I told Bruzer his rehab was over. Time to dig deep. My daughter and I needed him. He never used that sling again. I’m not even sure what ever happened to it.

We were about to begin a new chapter, the flood recovery chapter, and Bruzer would be with us every step of the way. His back was strong enough and so were we.

Tammy Davis is a teacher and a writer, finding lessons in everyday life. There will be a break in the Bruzer series as Davis travels to Iceland, but don’t worry, we’ll pick up right where we’re leaving off. Part One of this series can be found on www.tammydavisstories.com. Look for videos of Davis’s Iceland experiences on her You Tube Channel, Tammy Davis Stories and on Facebook Live and Instagram Live @tammydavisstories.