Last Friday night some grandparents went to watch their grandson play in a high school football game. They were in for a shock. Paying for the old and reliable paper ticket had given way to paying online at a website and receiving an electronic ticket on their smartphone. They showed up at the gate and could not get in. Only after granddad bribed the young ticket taker to use her phone to order tickets did they get in.

Colleges use electronic tickets now and they’re a hassle and ugly. The colorful old paper tickets were art and I kept them in a drawer. Intended to be cool, modern, and a convenience, electronic tickets are just the opposite. You have to download them to your phone, and if you want to give a ticket to a friend, you have to undergo an elaborate process involving emails and transfers. Want to sell a ticket to someone? Let me know how that works out. And what if your phone dies game day? Complicated—that’s the way life is now. 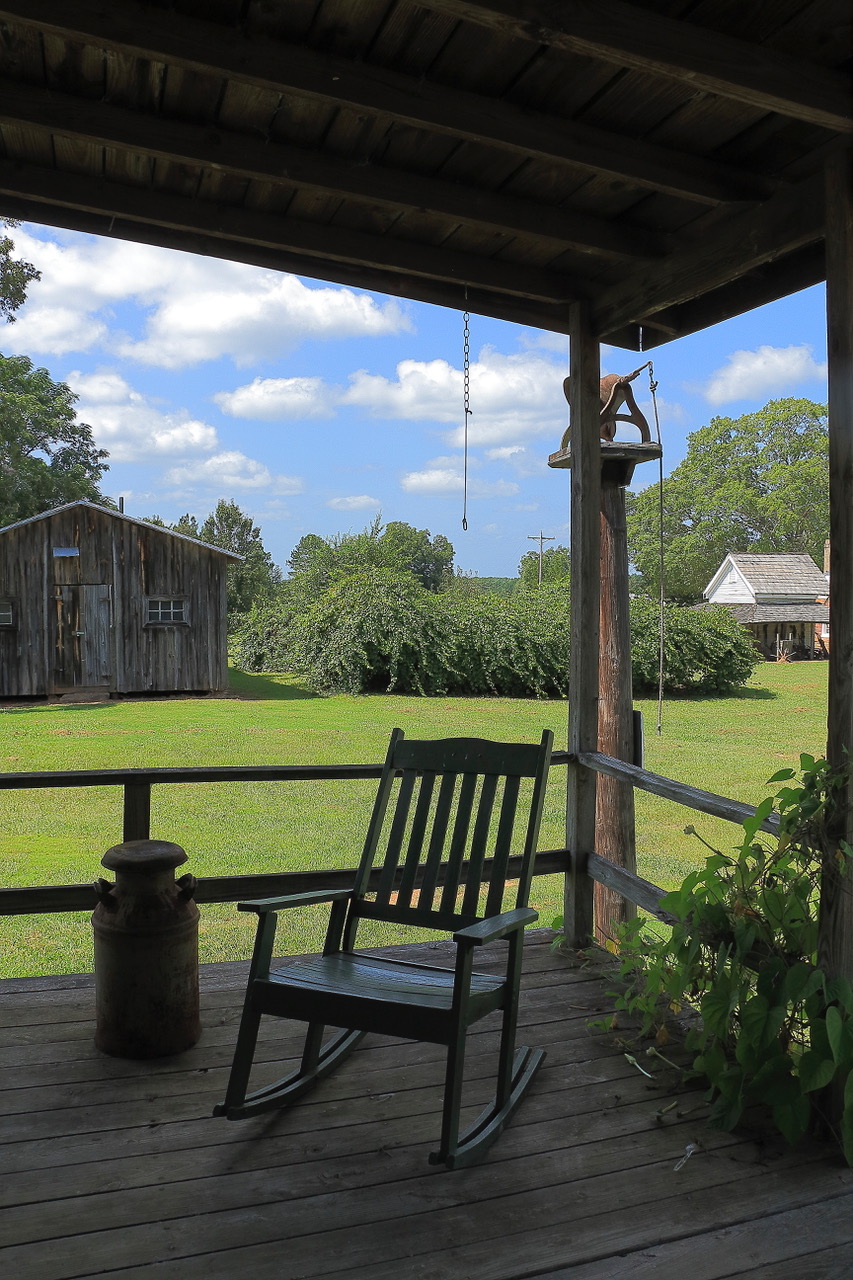 Here’s a photo for you. A rocking chair sits on a porch (remember those?) by an old milk can. Just beyond the porch stands a bell used to call farmhands to lunch. Today Farmer Bill probably sends a group text to his workers. What you don’t see here is significant. You don’t see plastic jugs of milk. You don’t see phones. The old ways weren’t fancy nor were they complicated but they worked.

The proliferation of electronic, aka digital ways, will continue. We’ll be forced to websites more and more. I don’t see any slow down in the use of plastic bottles, jugs, and containers of all kinds either. No wonder the ocean is full of plastic. Boys no longer walk highway shoulders picking up glass drink bottles to put some change in their pocket. Look closely at the photograph and if your eye is keen you’ll spot a plastic fork. How I wish fast food joints didn’t pump out so much plastic, paper, and Styrofoam.

This modern world, ugh. I seldom see rockers on a front porch anymore. To see them I have to drive out into the country and travel the back roads and even there I seldom see porch sitters. I guess it’s too hot to sit and rock anymore. Hide inside where air conditioning makes things tolerable and glue yourself to the TV, the propaganda box.

I’m a big college football fan. Back on January 11, 2021, after Alabama clobbered Ohio State for the national championship, I turned my TV off for 231 days. I didn’t turn it on until August 30 and only then because I was ready to get the latest football news. YouTube TV no longer worked even though I had paid my bill month after month while not watching TV. The problem? YouTube TV no longer recognized my “device” because it had been inactive so long. I had to go online and input data and get a code to key into my TV account. Success, but it took a while. It sure wasn’t a click of the remote. Things are cool, fast, and digital now but when they go haywire they make you want to cuss a blue streak.

And now, as further proof of how complicated life is, we have a new car/truck shortage due to the computer chip fiasco. I guess it’s asking automakers too much to roll out cars and trucks without GPS, satellite radio, Bluetooth hands-free phone service, and engines governed by computers. I’m sure they cannot do that even if they want too, retooled as they are to the new cool, digital ways.

Someday enough will be enough and I’ll retreat to a mountain cabin far from the madding crowd. It’ll have a porch with rocking chairs, and I concede that I’ll be stuck using a smartphone, streaming TV service, and all that. I’ll watch college football as always and I’ll be using digital tickets in my phone’s “wallet,” but I’ll always miss the old ways. But once football season ends, I’ll turn my TV off. Once a week I’ll turn it on for one minute just to let YouTube TV know I exist, that I’ve not experienced a digital death, that I have a drawer full of batteries to keep me alive. Then I’ll cross that desert known as non-football season yet again.