Note: Following is an excerpt from the The Last Sunday Drive to be released November 18.

In the 1950s it was customary for folks to take Sunday drives. Gather up the family and see the sights. Tour the countryside. See what there was to see and visit relatives. And like so many tires, the years rolled by. That was then; this is now. That enjoyable pastime, the Sunday Drive, is fast fading. “Sunday driver,” however, is alive and well. In today’s mad race against time, a driver who dawdles is a “Sunday driver,” but dawdling was the order of the day when the drive itself was the destination.

In the 1950s and ’60s families would make a Sunday drive just for the heck of it. It was a good way to see the land up close, a good way to banish boredom, a way to visit family. We can thank post-World War II prosperity and a blossoming romance with cars for Sunday drives in those simpler times.

Yes, that was then; this is the era of superhighways. Interstates and ever-widening highways and freeways seldom give you much to see as you rush from point to point. That’s merely driving. In Dad’s aqua-white ’56 Plymouth Belvedere, we journeyed. A Sunday drive felt a bit like the vacations we took on Highway A1A in Florida, a departure from the ordinary, an adventure. Back then we had two TV stations and as miraculous as they were, not even the marvel of television could cure the ills of a long, boring Sunday afternoon. We weren’t so easily entertained in the 1950s. The country beckoned. A Sunday drive was the high point of the week, a wondrous escape. The ordinary? It was extraordinary. See for yourself. 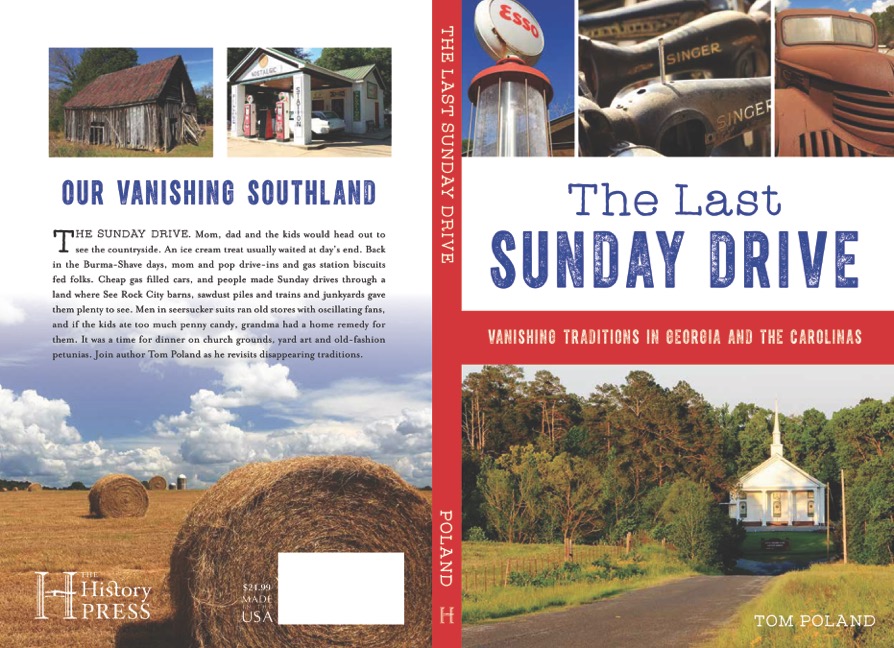 With church and dinner behind me, the afternoon looms long and empty—a vacant, blistering desert. Nothing to do, nowhere to go, and all afternoon to get there. Today feels like a month of Sundays. Time drags. My dog, Duke, sleeps beneath the house. In the dusty heat even the cicadas refuse to sing their rising-falling singsong song. It’s another sultry Sunday down South.

My escape? Reading. I go inside and pull out a Hardy Boys mystery, The Ghost At Skeleton Rock. A getaway with Frank and Joe will have to do. Just as I start Chapter 14, “The Unseen Enemy,” a hood slams out in the driveway. Here comes Mom with her purse. “Put your shoes on.”

Out the screened porch we go to pile into Dad’s car. “Where are we going?”

Behind a sleek jet-like hood ornament, we’re about to take off. The newfangled push-button automatic transmission turns the dash into a cockpit. Our long dusty driveway? It’s a runway. We build momentum, take off, and break through the boredom barrier, smashing it to smithereens.

We roll the windows down and breeze along the Augusta Highway. Through town, just missing the red light. Dad turns onto a dirt road. Now our jet-car leaves a contrail of dust as we glide by mysteries. Past a fire tower. What’s it like in that tower during a storm. Just beyond it sits an old homeplace with a cast iron hand-pump. Dad drank from it as a boy. Said he had to work the handle hard. “The water was cold.” Around a bend we pass a sawdust pile where chips glitter like sequins. Mom says, “Never play on a sawdust pile. It’ll swallow you and you’ll die.” Not far past the death chips is a yard with tree trunks painted white, albino-like. Why?

Onto a tarry, graveled road we turn and like a dog, I stick my head out the window into summer fragrances … a field of hay, the fertile smell of pastures, a hint of honeysuckle, and now and then musky swamp fragrances. And always the ripping sound of tires rolling through tar. [End of excerpt]

I enjoyed time traveling back to the days before interstates turned driving into a mad dash to get to the next traffic jam. I’ll take a back road any day and I suspect some of you will as well. If you want to know more about this book shoot me an email. —Tom Poland