Come May-June I burn the Rocky Shoals Highway up. I drive from Irmo, South Carolina to McCormick County and on into Georgia. My mission? Visiting two ravishing colonies of rocky shoals spider lilies. No one is there but me. Seems few know or care to see a true spectacle. Maybe it’s because the lilies lie well off the beaten path.

Hymenocallis coronaria (shoals lily, Cahaba lily) stages quite a show. Around these parts, you can visit three colonies as shoals lilies communities are called. Chester County, South Carolina has the largest known colony at Landsford Canal State Park. Stevens Creek in McCormick County, South Carolina has a grand colony where you can get close enough to smell the flower’s citrusy sweet fragrance. You’ll be tempted to pick a flower. Don’t. 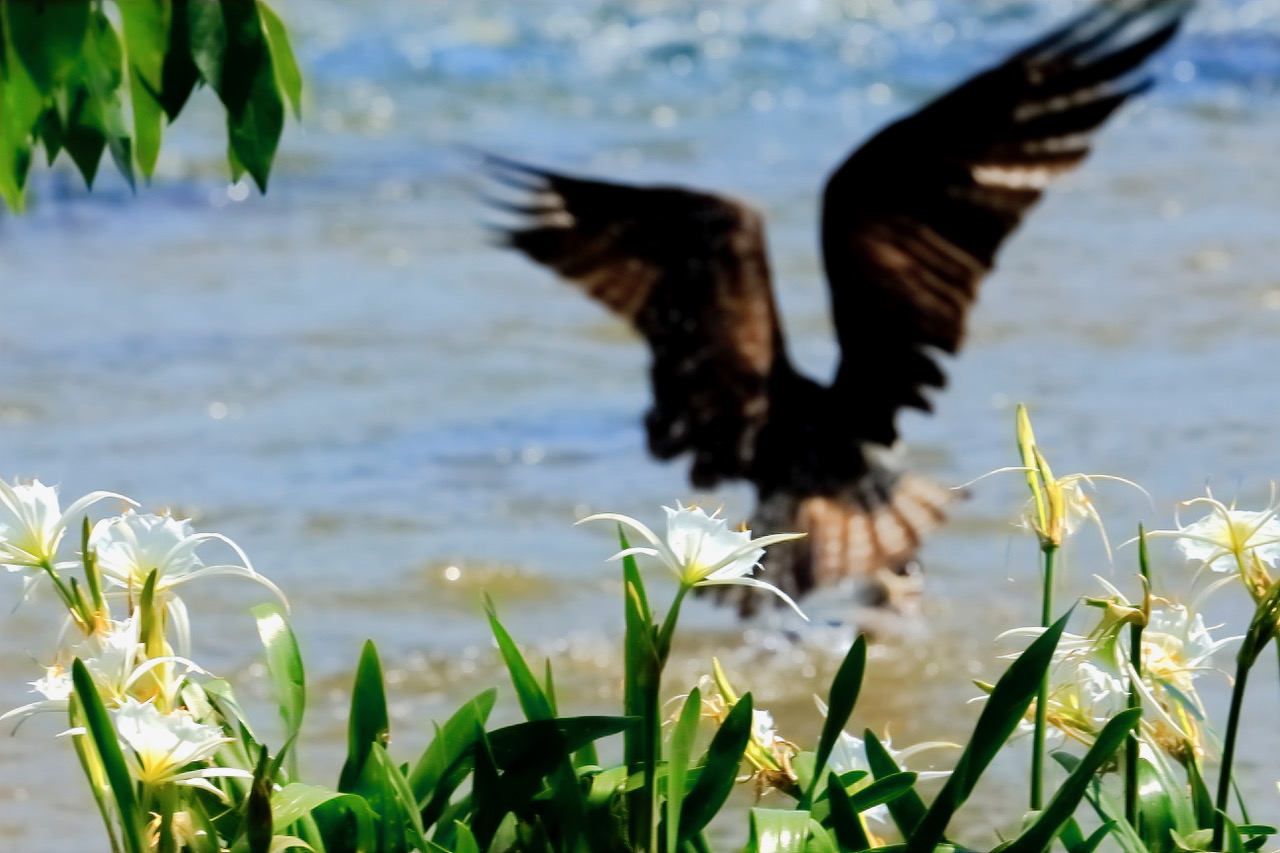 My favorite place to see the lilies is Anthony Shoals in Georgia on the Broad River. I like it for several reasons. First, it looms large in memory. On a happy day my mother took me to the shoals where her brothers and sisters caught and fried fish. I was maybe five or six, but I still see rock-studded waters and an uncle who scoured a black cast iron frying pan with sand until it shone like silver. I recall no lilies for good reason: it was summer and the lilies’ blooms had come and gone.

Outside of parks and preserves wild places still exist. That’s another reason I like Anthony Shoals and its lilies. It’s wild and partly inaccessible. Babylon had its hanging gardens and Anthony Shoals has its river garden, but to see it you have two options: one if by land and two if by water. By water is a breeze. By land is an adventure that involves a drive into remote, back woods down a rough dirt road. Weather can make the drive tough. Sometimes ruts, mudholes, fallen trees and limbs turn the road into a third-world footpath. Even so, that’s the easy part. To get to the river you have to descend a steep winding footpath wrought with rocks and vines and slippery carpets of pine needles. Once you reach a few open places, you’ll see sweeps of lilies. Listen for the watery crash of ospreys. Stand still as can be and one will crash into the water mere yards away. Coming back up the bluff will test your stamina. 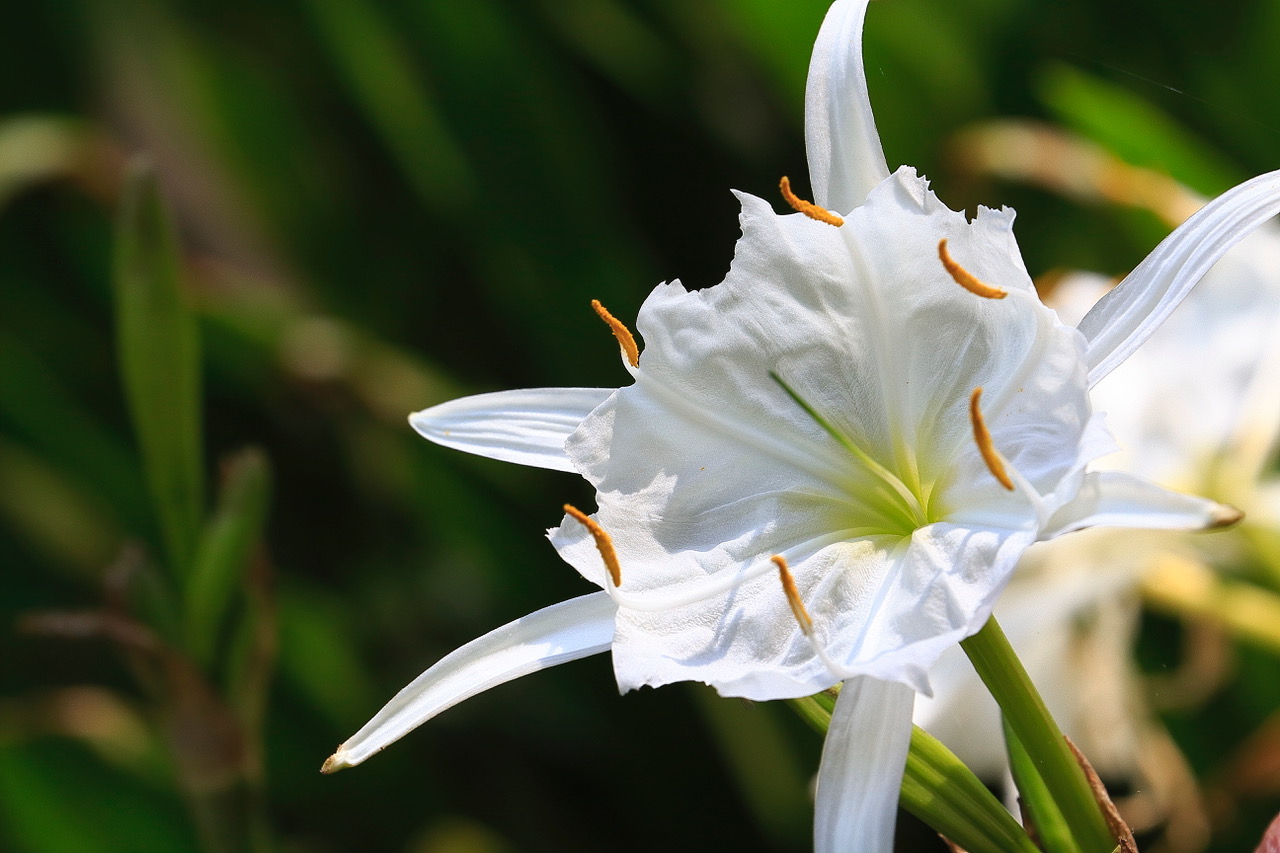 I like to visit Anthony Shoals and Stevens Creek on the same day. My mythical Rocky Shoals Highway takes me to these wild places resonant with peace and beauty. Leaving my vehicle behind, I walk. From afar comes a sound. I push onward toward something alive and formidable, the opera of a wild river raging against bedrock. The sound strengthens with each step. The water roars and hisses as it froths and foams over and around rocks. Through breaks in vegetation, milky-white filigrees twist and braid and murmur and whisper to beget inner peace as no other sound can—the soothing silence of white water’s white noise. Through greenery I see snow-white blooms performing their bobbing, mesmerizing dance. How those lilies must have thrilled William Bartram in a land of rocky creeks, plummeting elevation, and free-running rivers. 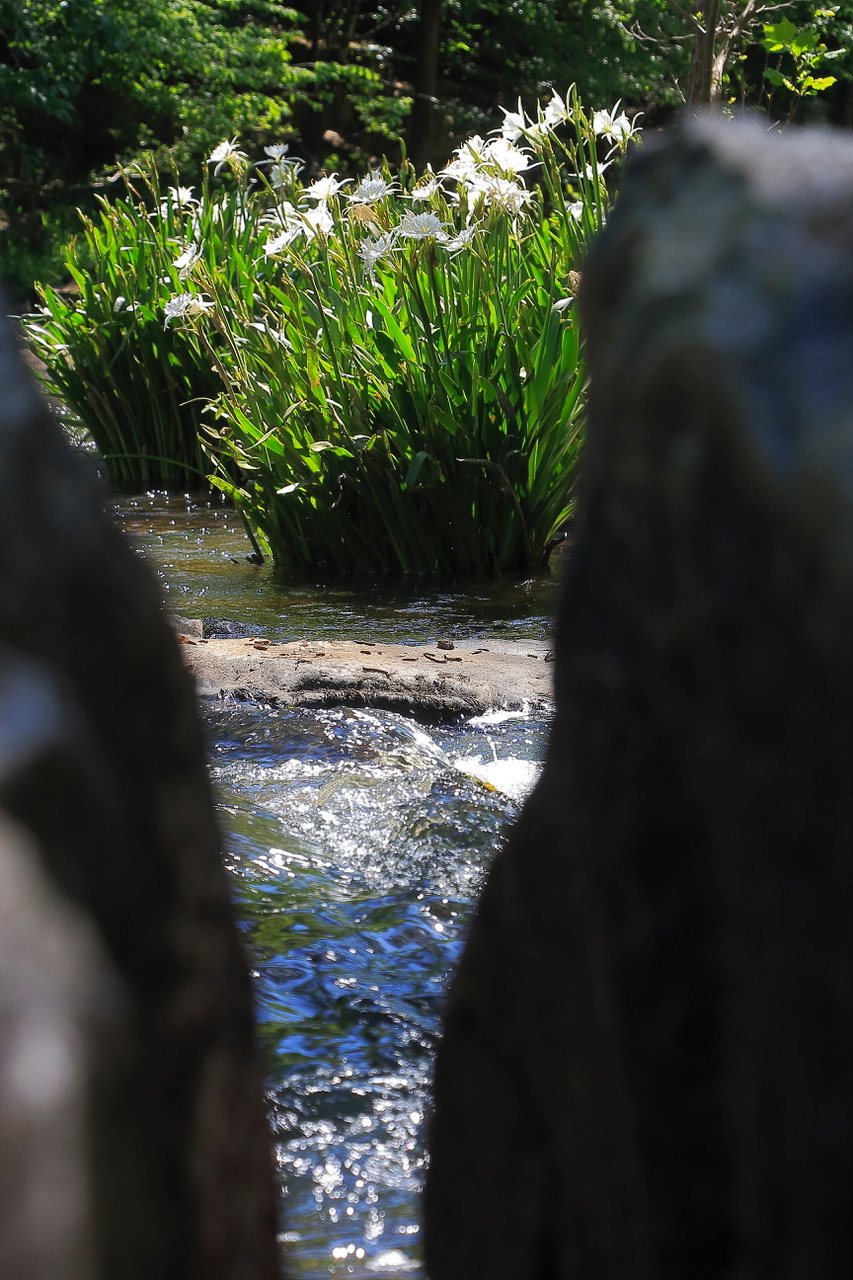 Today the shoals lily is threatened as much of its habitat lies beneath lakes where man dammed rivers. It thrives in swift rocky waters but clings to existence in South Carolina, Georgia, and Alabama. When I think of the major impoundments such as Lakes Hartwell, Clarks Hill, and Murray, I think of the habitat Hymenocallis coronaria lost. Scattered small colonies exist here and there. Some owe their existence to people who set them out. A natural, good-size colony staggers you. The word “spectacle” comes to mind.

Words don’t do the flower justice. You won’t get it until you stand before an expanse of white-foaming blue water, brown rocks, slabs, and boulders and clumps of snow-white lilies with stems as green as bell peppers. The blooms glow like diadems. But know that it’s not a true lily. The stunning flowers belong to the amaryllis family, which includes jonquils, narcissus, and daffodils.

Each May-June you know where I’ll be. You stay home so I’ll have all that majesty to myself.