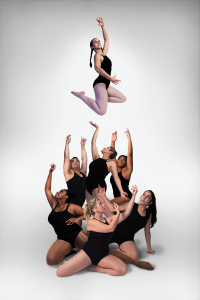 The elite pre-teen dance squad of Liverpool Dance Works is preparing for Nationals in Tampa Bay, Florida. Led by Dance Teacher Pat (Monk), this group of dancers conspire to dominate nationals, literally and figuratively rehearsing within an inch of their lives. Little do they know they’ll discover not only their love of dance, but who they are as humans. Dance Nation, called “a blazingly original play” by The New York Times, had its world premiere at Playwrights Horizons in 2018 and subsequently its UK premiere at the Almeida Theatre in London. It was a 2019 finalist for the Pulitzer Prize in Drama and is the recipient of the Susan Smith Blackburn Prize. Trustus’ production marks the southeastern premiere of the play. “Dance Nation is exactly what audiences are longing to see at Trustus,” says interim Artistic Director Dewey Scott-Wiley. “The raucous and moving piece of theatre draws on our many shared experiences, and insists that we unleash our own power.”

A refreshingly unorthodox play, Clare Barron’s Dance Nation conveys the joy and abandon of dancing, alongside the changes to body and mind of its preteen characters as they peer over the precipice toward adulthood. While the show centers around a group of middle school-aged dancers, the entire team is played by a multigenerational group of actors. (Please note: the show contains content not suitable for all ages. For more information, please contact the Box Office.) Elizabeth Houck-Zozaya plays Amina, the star dancer of the team. “Dance Nation is a mouthpiece for the past versions of ourselves,” they said. “Over the past couple of years of the pandemic, these iterations of self have likely brought us thoughts and memories of our inner child/adolescent/early adult years, and asked us to heal by both holding what has happened and honoring who we are now.” Trustus’ Box Office manager Gaby Walker plays the always-second-best dancer, Zuzu. “There’s a level of honesty that children possess that adults seem to lose as we get older and become more self aware. I appreciate the level of honesty Zuzu has with herself, because it allows her to be unquestionably honest with those around her.”

“I think Dance Nation has it all: energy, well-written characters, special effects, fierce dancing, and the ability for an audience to experience a play that’s unlike anything they’ve seen before,” says actor Jonathan Monk, who takes on the role of the stringent head of the studio, Dance Teacher Pat. “Training as a young actor exposed me to a number of teachers like Dance Teacher Pat, who were these firebrand personalities that pushed you beyond what you thought possible, but sometimes at the cost of emotional wellbeing and personal safety. Every character in this play is trying their hardest, and the playwright does such a nice job of shining light on power dynamics, body image and perseverance.” Houck-Zozaya agrees that the story and its characters feel familiar to each actor. “As a whole, Dance Nation has spoken to and resonated within the echo chambers of my adolescence. Amina and I are simpatico: at that age, I undoubtedly felt the same pressure for perfection from myself and everyone around me (but mostly myself), the solitude shame brings, and the desire for all the affirmation and love imaginable.” Walker sees the same parallels between herself and Zuzu. “The best part about Zuzu is that, through it all, she just keeps going. There may be a time where she gets knocked down, and you may even see it affect her emotionally, but while she’s down, she uses that time to make decisions that will ultimately make her the happiest in the end. I admire her so much for that.”

The cast hopes that the audience walks away feeling the same way: seen. “These are relatable experiences found throughout the play,” says Walker, “and overall, I hope the audience feels a sense of togetherness. Though these experiences can make you feel alone or singled out, I hope they see these characters and feel like, ‘Man I’ve gone through that before. I’m glad I’m not the only one who has felt this!’” Monk says, “It’s a wild ride and should make for a fun night where you’ll probably find yourself thinking about some moments for days afterward.” Says Houck-Zozaya, “Dance Nation gives us the chance to look back, with both a sense of fondness or ‘WTF?’ and look at our present lives for what they are. The play is special and silly and scary — and reminds us life is too.”

Dance Nation is sponsored by Prisma Health. A talkback on “the adolescent experience” will follow the May 1st matinee at 5:15pm, and will include Dr. Peter Loper, Child and Adolescent Psychiatrist, Prisma Health Children’s Hospital–Midlands, as well as creatives from the show. All are welcome to attend the talkback.

Dance Nation opens Friday, April 29th at 8:00pm and runs through Saturday, May 14th. This is a limited engagement with only nine shows and one matinee on Sunday, May 1st.. The box office and bar open one hour prior to show time. In accordance with the updated guidelines, Trustus will finally return to popcorn service for the first time since 2020. For more info on Trustus’ Safety Guidelines, please visit trustus.org/safety-guidelines. Reservations can be made online at trustus.org or by calling the Box Office at (803) 254-9732.