One Man’s Many Rock Bottoms

Uncut Gems opens with a chaotic Ethiopian mining scene where a worker has been badly injured. At first, the opening didn’t make sense.  Lots of screaming and confusion with nobody focusing on what needed attention – the injured man.  Now I see the introduction as a perfect summary to Uncut Gems.  The setting changes quickly, but the dynamic is exactly the same.  We go from the mines of Ethiopia to the jewelry district of New York City with lots of angry people, lots of screaming and confusion, and a very damaged man in the center of it all.  The man in Ethiopia has a serious leg injury  – visible to all.  Our main character’s injuries are just as severe, but his brokenness is on the inside.  The Ethiopian miner’s leg can be set and bandaged, and healing will take place.  With our main character, a gambling addict, the solution is not as simple. 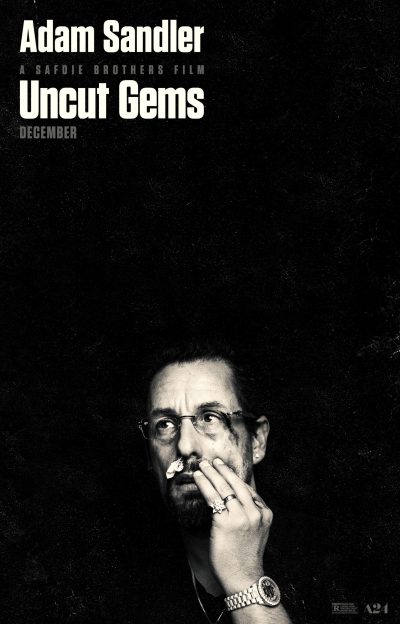 Howard Ratner, played by Adam Sandler in what is certain to be an award-winning performance, is the broken man at the center of this noisy, profanity-laden movie.  Ratner owns a jewelry business with pop music stars and sports legends as clients.  He’s a wheeler dealer, a hustler always looking for the next big score.

This movie really annoyed me at first.  The angry loan sharks, the profanity, the constant sound of the buzzer every time people came in and out of the cramped jewelry store – it was all getting on my nerves. Most of the movie is a mess, just like Ratner’s life.  He is constantly robbing Peter to barely pay Paul.  Everyone is after him.  His wife is fed up.  His party-girl mistress gets caught partying with another.  It’s exhausting.

Early on, I thought Ratner had hit his rock bottom.  He was trying to be a family man attending his son’s school play.  Loan sharks chased him, caught him, threatened him, stripped him and locked him in the trunk of his car in the school parking lot.  I thought that would get his attention.  No.  Later, he catches his girlfriend partying with another in the club bathroom and is humiliated and gets tossed out in the street.  That wasn’t enough to make him change his ways.  Surely, getting his face smashed and his nose broken would get his attention.  Nope.  Even when he’s beaten in public and tossed into a fountain and has to walk back to his store dripping wet with blood all over his face, Ratner still continues planning his next hustle – the big one.  Howard Ratner, the man of many rock bottoms.

Despite the craziness of this movie, you get connected to the characters, and you want a happy ending for all  – Ratner, the wife, the kids, even the girlfriend.  You want it all to come together for the best.  Like most relationships affected by addiction, that’s not how it out plays out.  It’s not how it played out in this movie at all.  Without causing a spoiler, I’ll just say that everyone in the audience gasped out loud at the surprise twist.  I turned to the people beside me and behind me to see mouths literally hanging open.  It was powerful.

I cannot say I enjoyed Uncut Gems.  I’m not sure it was worth sitting through the chaos and profanity to get to the ending.

If you are looking for an uplifting, lighthearted movie, this is not it.  If you are willing to be bombarded with profanity to see Adam Sandler give the strongest performance of his life, go see Uncut Gems.  Do not Google the ending.  Do not Google the plot.  Just buy your ticket, get your popcorn, and hang on tight.  It will get you when you least expect it.