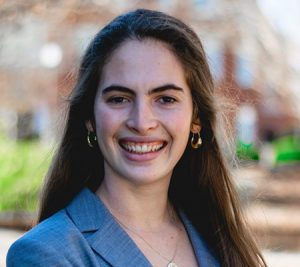 Louise Franke, a Clemson senior from Spartanburg, S.C., made University history today when she became the first Clemson student named a Rhodes Scholar.

Franke, an Honors College student majoring in biochemistry with minors in political science and philosophy, is one of 32 American Rhodes Scholars selected through an intensive application and interview process.

“The Rhodes community is an intellectual community where people care about ideas, about action and about the world,” said Franke. “It’s a group of people that fight the world’s fight, and the fact that I’m now part of that blows my mind. It’s a dream come true.”

The Rhodes Scholarship provides for study at the University of Oxford and is recognized worldwide as the top undergraduate award for college students.

“Congratulations to Louise on this incredible achievement. I am very proud of her, not only for this prestigious honor, but also because of her desire to use her education to make a difference in the world,” said Clemson University President Jim Clements.

Clemson has had six Rhodes finalists since 2006, including two this year, but Franke is the first to be named a Rhodes Scholar.

“Louise’s success speaks volumes about the high quality of our students and their work ethics, as well as the dedication of our faculty to our students,” said Robert Jones, executive vice president for academic affairs and provost. “In my 45 years of higher education experience, this stands out as one of the highest pinnacles of excellence.”

Franke plans to pursue a B.A. in philosophy, politics and economics at Oxford before earning a joint M.D. and Ph.D. in bioethics. Her goal is to practice as a physician while forging a career as a bioethicist in the public policy and academic realms.

Bringing philosophy into the laboratory

When Franke started her first year as a Clemson undergraduate student, she explored every option in her path.

She wanted to pursue a career in medicine, but also loved studying the humanities. Ultimately, she chose both.

“I’ve been lucky to study both biochemistry and the humanities during my Clemson career, but until this year, I never imagined that there was a way for me to apply both of them to my career,” said Franke. “Studying at Oxford gives me an opportunity to combine the practical with the theoretical, so I could focus on both of my passions while also doing something for the world.”

Her work as a researcher in the Ingram-Smith lab in the Eukaryotic Pathogens Innovation Center (EPIC) the energy metabolism of the pathogenic protist Entamoeba histolytica.

She also serves as the College of Science representative to the Clemson Student Ethics Commission, where she helps foster ethics education on campus.

Franke explores public policy in detail as a Dixon Global Policy Scholar, a select program for students interested in enhancing their knowledge of issues that shape the world. The program brings students from different majors together to discuss broader policy issues, something Franke said broadened her understanding of different impacts.

“You’ll have someone from bioengineering and someone from computer science or environmental studies or political science all contributing to how different issues apply to their fields,” said Franke. “Those discussions are some of my favorite Clemson experiences so far because they helped me see the importance of interdisciplinary work and how it can positively impact public policy development.”

The Lyceum Scholars program, which offers a required political philosophy class each semester, also allowed Franke to apply a philosophical lens to her studies in and out of the lab. She was part of a group of only 10 scholars across campus selected to participate, which also involves biweekly Socratic sessions with a professor of political philosophy.

In addition to being a finalist for the Rhodes Scholarship, Franke was named a Political Studies Fellow at the Hudson Institute in 2019, where she participated in rigorous study of politics and political philosophy.

This year, two Clemson finalists were selected for the first time in the University’s history, including Clemson senior Ronnie Clevenstine, a National Scholar and Honors College senior majoring in economics with minors in political science and sustainability.

The Rhodes Scholarship is the oldest and most prestigious scholarship available to American College students. The award provides financial support for students as they complete postgraduate degrees at the University of Oxford.

Rhodes Scholars are chosen based on academic excellence; the energy to use their talents to the fullest; attributes such as truth, courage, kindness and devotion to duty; and moral force of character and the instinct to lead.