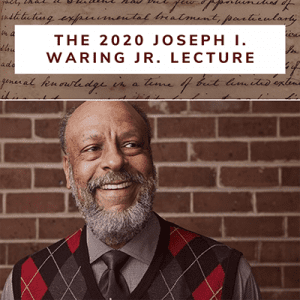 Bernard Powers Jr., Ph.D., will present the 2020 Joseph I. Waring Lecture, featuring his talk: “From Black Bodies to the Black Body Politic: Black Carolinians, Health, Healers and History.” Powers will discuss the nature and complicated history of health and health care for African Americans in South Carolina. The MUSC’s Waring Historical Library will host the lecture on Thursday, March 5, at 5:30 p.m., in the Drug Discovery Building Auditorium on the MUSC campus.

Powers has worked in higher education for approximately 40 years. For 26 years, he was a professor of history at the College of Charleston, teaching courses in American, African American and African diasporic history.  In 2018, he became the college’s founding director of the Center for the Study of Slavery in Charleston. His first book, “Black Charlestonians:  A Social History 1822-1885,” was designated an “Outstanding Academic Book” by Choice Magazine. Powers is a co-author of “We Are Charleston: Tragedy and Triumph at Mother Emanuel,” which contextualizes the city’s racially motivated murders of 2015. He has published book chapters and journal articles and has appeared in African American-oriented documentary films, including most recently, the PBS production: “The African Americans: Many Rivers to Cross and Emanuel: the Untold Story of the Victims and Survivors of the Charleston Church Shooting.” Currently, he is researching black Methodism in South Carolina.

Powers has served as a board member or consultant to several historic preservation organizations. He was the founding president of the Charleston chapter of the Association for the Study of African American Life and History. In 2019, that organization recognized his commitment to “research, writing and activism in the field of African American life and history” with the Carter Godwin Woodson Scholars Medallion.

Powers earned his Ph. D. in American history at Northwestern University. He has been a board member for the International African American Museum since its inception, and today, he serves as its interim CEO and president.

This event is free and open to the public, though reservations are recommended. A reception will follow in the lobby of the Basic Science Building. For more information, please contact 843-792-2288 or [email protected].