October 26 found me on a history adventure courtesy of Ralph Scurry. Ralph and I met at a book talk in Edgefield several years ago. Ralph loves history and he invited me to visit his beautiful homestead in Greenwood County. It took me a while but I finally got to see his place, and its natural and man’s history did not disappoint. There I saw a circa 1775 log cabin most likely built by 1764 Londonborough settlers. Ralph’s ancestors were born in that cabin, which is as solid as the Rock of Gibraltar. Originally the cabin sat about four miles away in what was once Edgefield County until Greenwood County came to be in 1897. 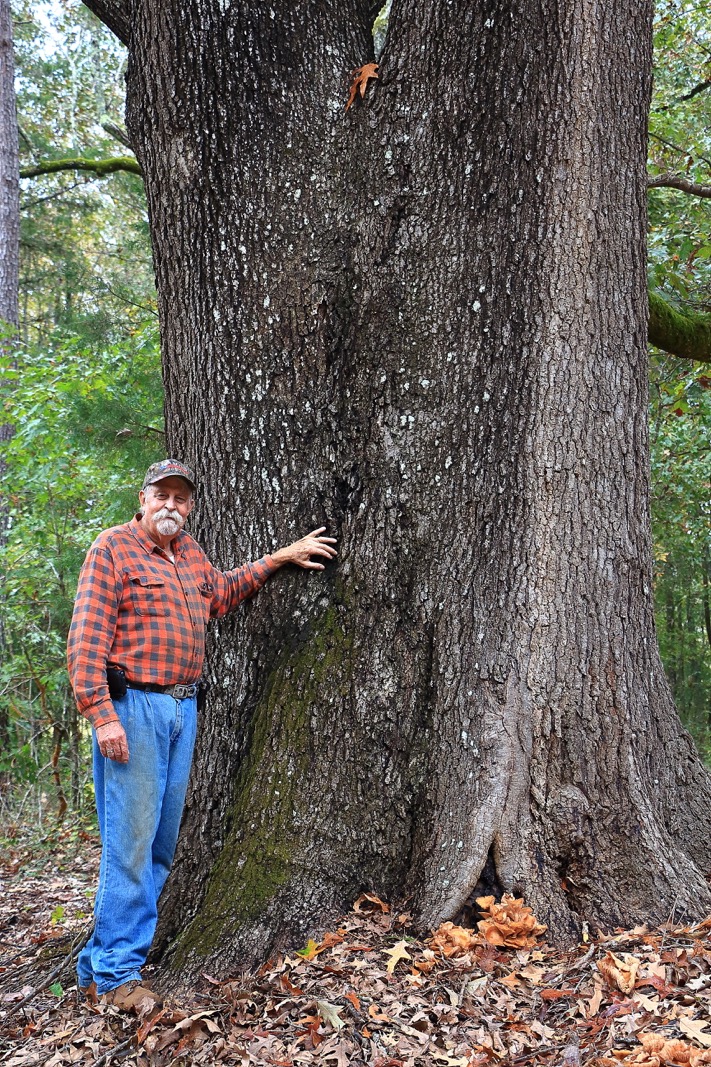 Two factors motivated Ralph to relocate and restore this cabin of hand-hewn pine logs. He wanted to protect a historically significant structure and he wanted to preserve his family’s heritage. His ancestors began using the cabin in the 1850s. He has an 1895 photograph of his great, great grandmother and her children standing in front of the cabin. Among the children stands his grandmother.

First, we had woods to explore. Riding on golf carts Ralph gave me a grand tour of his land and old-growth trees. From sky-blue mushrooms to big trees, natural history runs rich here. Man’s history lives here too. A pile of ancient fieldstones quite possibly could be the homesite of one Rev. Samuel Frederick Lucius. The Church of England’s “Society for the Propagation of the Gospel” sent Lucius to the German settlement area around 1770. When the Revolution broke out in the Carolina backcountry, the Right Reverend had to hightail it to Charles Town for British protection.

Trees here, however, literally put on the big show. though show stealers, Ralph’s dogs, Ethel and Lucy, made the day extra special. Obedient and loving, Lucy and Ethel sat in Ralph’s golf cart much like you and I would, but spying a squirrel off they tore following it from tree to tree. And some trees are big. Really big.

Ralph takes a cautious approach to his big trees’ record potential. “I’d like an enthusiastic person of knowledge to look at the trees. However, this is what I believe to be true. Large trees consist of shagbark hickory, the current state champion, and another, yet to be measured, should rank number two. Southern red oaks, one currently number two, and another should make the list. Northern red oaks, yet measured, should be state champion or second place. Other large trees with potential ranking are American beech, willow oaks, white oaks, swamp chestnut oak and common persimmon.”

Coincidences and a love for the land teamed up to keep the saws away. Congaree National Park comes to mind when you see these large trees, and a pond brings Walden Pond to mind. A creek runs through the tract and in places its rich blue-green clay abounds. Potters of yesteryear took note of that, no doubt.

Big trees, preservation, and history—man and nature’s—live together on Ralph’s tract, a labor of love. Man has left the big trees alone, and that brings to mind something University of Georgia Ecologist Whit Gibbons, said, ‘the best protection for the environment is no people.” In this case, the best protection is one person—Ralph Scurry.