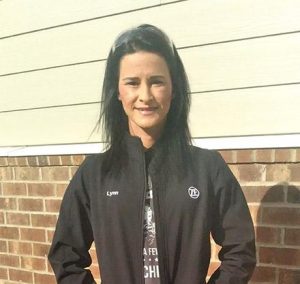 Before Lynn Rogers got home from her job interview with ZF Transmissions in Gray Court, an email offering her the position already had landed in her in-box. A 2020 graduate of Piedmont Technical College’s Computerized Numerical Control (CNC) Certificate Program, Rogers has been working full time at ZF for about a year now and is proud to be among the female faces in a profession where they once were scarce.

“I am one of five females in my department at ZF,” Rogers said. “I think a lot of women sometimes are intimidated or not even familiar with machining. I like putting a female face on the profession. We are out here working in a highly skilled, technical role.”

Before enrolling in the CNC Certificate Program at PTC, Rogers worked for 14 years in the medical records field. Seeking a change, she initially began at PTC as a nursing major. Then it was respiratory care, but she just wasn’t finding her niche. After a conversation with Machine Tool Technology Program Director and Instructor Phillip Calhoun, Rogers decided to try the CNC Certificate Program. She admitted that it seemed like a crazy move at first.

“I had no manufacturing experience whatsoever,” she said. The program was described as a ZF “Boot Camp,” and there were about 10 ZF employees in the class. “They worked in assembly and were in the class to get out of assembly and move into machining.”

Rogers knew she was in the right place from day one, and she has been applying the knowledge from class on the job every day.

“In class, we learned a lot of terminology, which has been really helpful to me on the job,” she said. “When I am on the floor and things are being said, I know what they are talking about. A lot of people don’t know how to read a blueprint, but we learned that at PTC. The machining at ZF is way more involved than lathes and mills. It’s all part of a much larger-scale picture.”

Calhoun was impressed with Rogers’ work ethic, conscientiousness, and attention to detail.

“She was a really enthusiastic student,” he said. “She was here every day. She always took notes, and she often stayed after class for extra time on the machines.”

With a year under her belt in manufacturing, Rogers already is shaping up her next career goals, and she wants to realize them at ZF.

Calhoun sees no reason why Rogers wouldn’t achieve this goal. “It’s not surprising that Lynn wants to excel and grow at ZF,” he said. “She has all the capabilities to do that. Her drive and tenacity are unreal, and she has great mechanical ability.”

Rogers works the second shift at ZF, which works out well for her as a parent because she can take her children to school in the morning, and she has family and a teenage daughter to help out in the afternoon after school. She would recommend advanced manufacturing fields to women who may never have considered them before. The world is changing.

“This is where the money is!” she said. “Women are in this environment, and we are thriving!”

For more information about the Machine Tool Technology offerings at PTC, visit www.ptc.edu/machinetool.