A botanical superstar lives in the South. It’s exquisite, ephemeral, and periled, in that much of its habitat lies beneath lakes. I’m writing about the rocky shoals spider lily. As status goes, it’s a national plant of concern, but you’ll find it in just three states: South Carolina, Georgia, and Alabama.

Babylon had its hanging gardens and South Carolina has its watery, undulating gardens. What’s considered the world’s largest colony blesses South Carolina with blooms aplenty this time of year. You’ll find it at Landsford Canal State Park in Chester County. Stand near this blooming colony of rocky shoals spider lilies and you’ll enjoy a concert of babbling water and a banquet for the eyes. Dark green stems reminiscent of bamboo shoots support delicate flowers that bring ballerinas to mind. Dancing flowers upon a stage of rushing water. It’s a performance you’ll not forget.

South Carolina has other colonies. A magnificent colony thrives on Stevens Creek in McCormick County. In Columbia you can see clumps of them where the Broad River approaches the Saluda River east of the I-126 bridge. I’m told a colony exists along the Savannah River Bluffs Heritage Preserve near North Augusta. I hear too that Lockhart, South Carolina, in Union County has lilies on the Broad River. 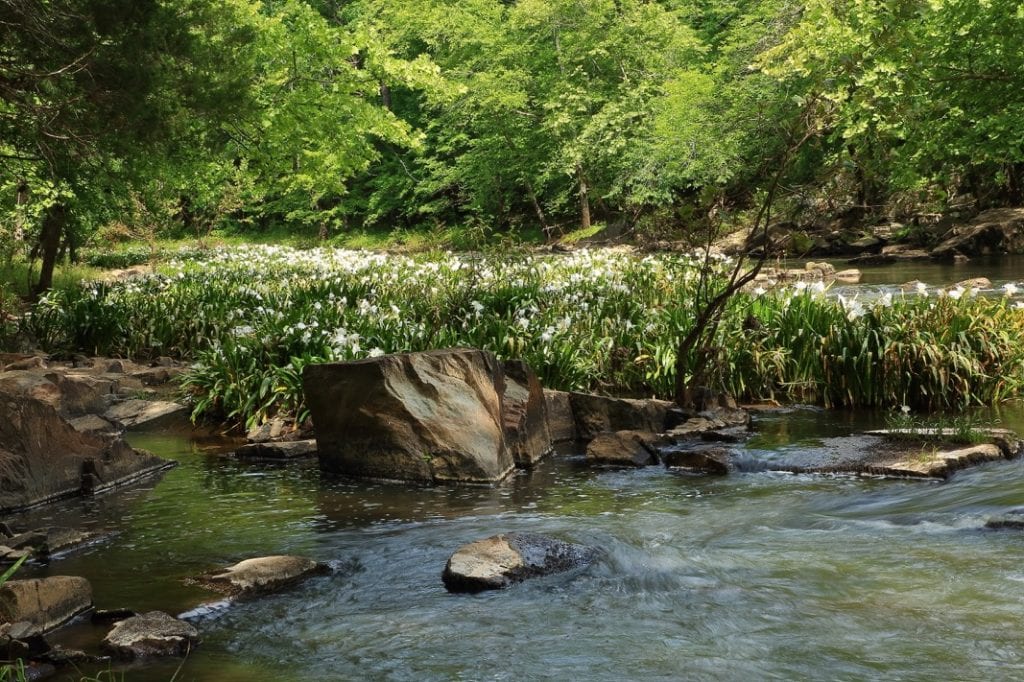 In 1783 William Bartram, the first botanist to observe this species, described it as the “odoriferous Pancratium fluitans which almost alone possesses the little rocky islets.” His sighting was at the cataracts of the Savannah River, Augusta, Georgia, and then as now the plant loves rocks in swift water. 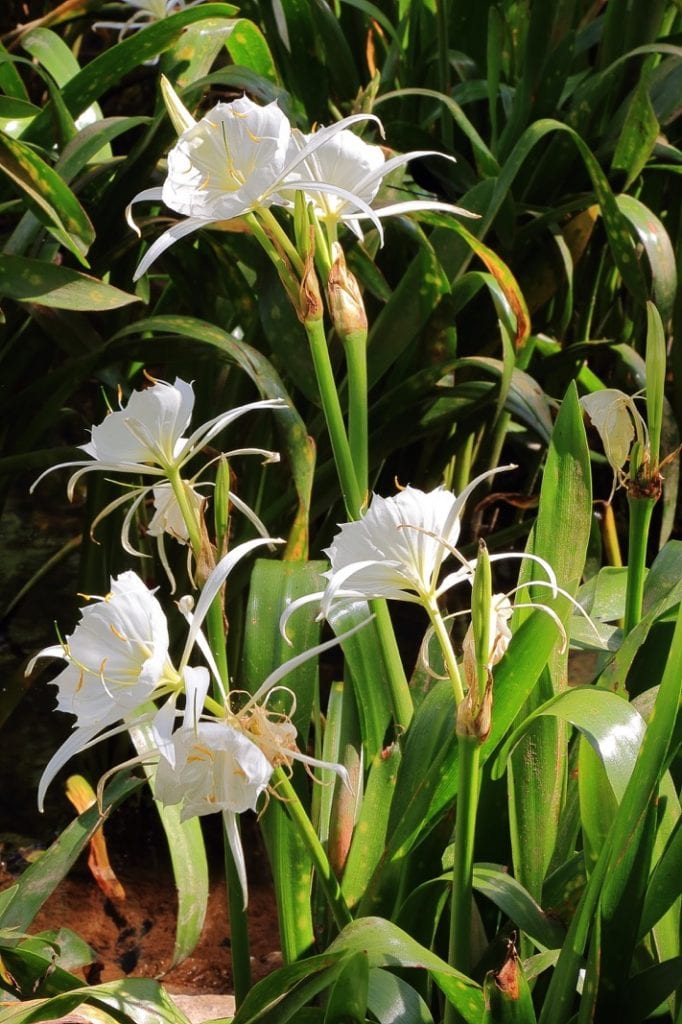 If you’ve not seen their white-green May-to-June spectacle, you must. This time of year I seek out the rocky shoals spider lilies in South Carolina and Georgia for a beautiful reason: they’re in bloom and they’re a dream for photographers and artists. You can lose track of time and your worries in the presence of Hymenocallis coronaria, an aquatic, perennial flowering plant species endemic to the Southeastern United States.

One Sunday morning I drove up to Landsford Canal State Park. There I saw dense clusters of lilies, the world’s largest colony, thriving on the Catawba River. Kayakers darted in and out of the majestic clumps, and people viewed them from an observation deck. I don’t know that Harry Hampton ever saw these splendid lilies but I’d wager he did. If he wrote about them I’m sure he would have set the record straight. The rocky shoals spider lily is not a true lily. It’s more closely related to daffodils.

These cousins of daffodils grow on the Catawba and Cahaba Rivers, two similar-sounding names. Folks in Alabama call it the Cahaba lily; elsewhere it is known as the shoal lily. In Georgia, it is usually called the shoals spider lily. Most botanists and conservationists I know call it the “rocky shoals spider lily,” a name that comes from its preferred habitat: rivers where fast-flowing, oxygen-rich water runs over rocks. This stunning perennial grows to three feet in height in direct sunlight. Flowing water carries its seeds away and when they land in a rocky crevice, they can form a colony—if conditions are right. Alas, man’s dams did away with many rocky shoals. 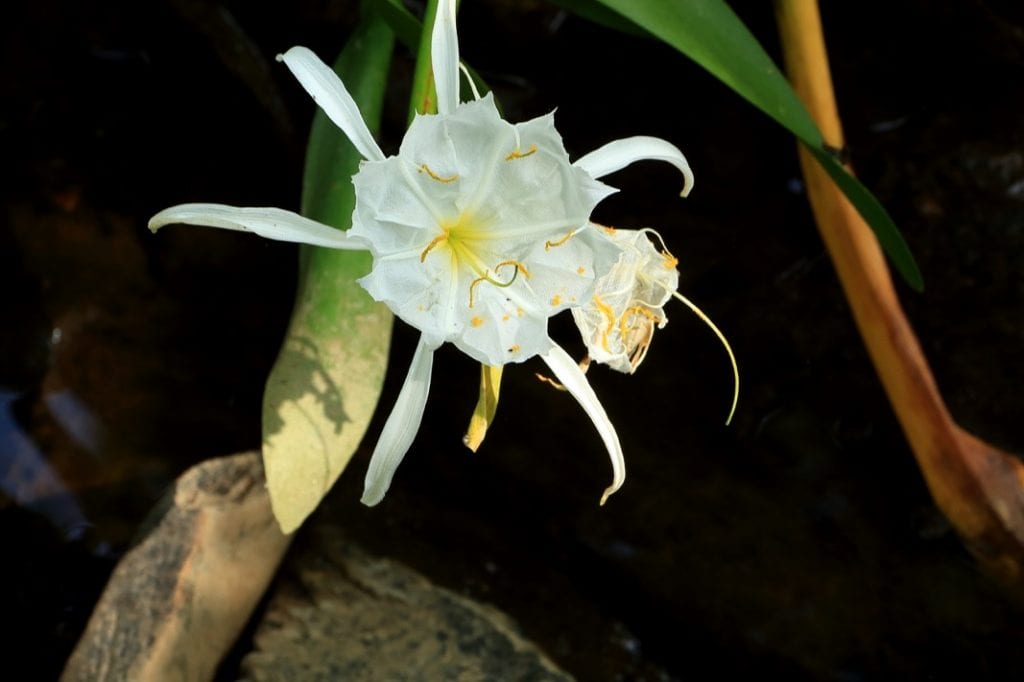 William Bartram saw rocky shoals and he saw spider lilies during his travels in the 1700s. Of them, he wrote: “Nothing in vegetable nature was more pleasing than the odoriferous Pancratium fluitans.” (Today, the scientific name is Hymenocallis coronaria.) Bartram saw elegant white flowers arching over dense green stems, their thick clusters festooning rocks. You can see them too and note upon close examination how each plant sends up one to three stalks with as many as six to nine flowers adorning each stalk. (The plant’s beauty lures collectors, another reason it’s in danger.)

I love to explore places where I see a world that existed before dams and electricity changed things. When you find rocky shoals spider lilies, you have found just such a place. This spring head to Landsford Canal. The flowers won’t last long so don’t tarry as old folks would say. Take photos and enter the Harry Hampton Wildlife Fund’s annual South Carolina Wildlife photo contest. Your lily photographs could end up in South Carolina Wildlife’s calendar. Whether they do or not, you’ll come away with memories of a place artist Philip Juras described as a “watershed where the sound of a wild river still rises from such a wide swath of bedrock.” And you’ll never forget the showy, exquisite, rocky shoals spider lilies.