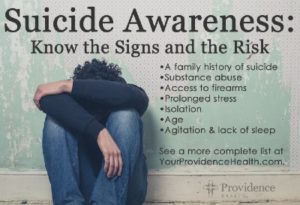 Everyone knows someone who is struggling with mental health concerns. But would you know if someone you love may be contemplating suicide? Do you know the warning signs for suicide?

Each year, nearly 45,000 Americans take their own lives making suicide the tenth leading cause of death in our country, according to the American Foundation for Suicide Prevention. Mental illness plays a dominant role in suicide. Roughly 90% percent of suicide fatalities occur in people who were known by someone to struggle with mental illness.

Become familiar with the most recognizable signs so you can identify if a friend or loved one may be considering suicide. Here are some of the more common signs of a Suicide Risk:

While risk factors can vary, there are some commonalities among suicide victims. Circumstances commonly found surrounding a suicide include:

If you recognize these signs in yourself or someone else, seek help. The National Suicide Prevention Lifeline is an easy place to start at 800-273-8255. The 24/7 service offers free and confidential emotional support to people in suicidal crisis or emotional distress. Another resource is the The Columbia Area Mental Health Center which is an outpatient facility of the South Carolina Department of Mental Health. USC students have access to mental health services here. You can also find a list of mental health centers on here.

The most important thing is that you take the threat of suicide seriously.