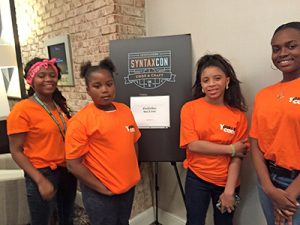 Now in its fourth year, the program began in November 2016 when YWCA Greater Charleston launched Charleston’s first Girls Who Code club for middle school girls. With the success of that pilot program, more clubs followed through the years under the Y Girls Code banner, expanding both the geographic reach and age range of the clubs.

Each club is designed to economically empower girls of color by helping them break gender and racial barriers in the high-paying technology industry. Participating girls learn key coding concepts, solve a problem in their own communities using what they’ve learned, and join a network of other girls and women in technology.

Despite new interest in diversity initiatives at many of the world’s largest technology firms, women of color are still woefully underrepresented in the industry, which pays wages that are well above average. For instance, YWCA Greater Charleston’s 2019 #WhatWomenBring technology honoree, Lilyn Hester, Google’s Southeast US public policy, government, and community relations, is a rarity as a woman of color in a leadership position in the field.

According to the 2018 report Women and Girls of Color in Computing, women of color make up less than 3% of the technology workforce, and just 2% of all high school students taking an advanced placement computer science course are black girls.

In January and February of this year, YWCA Greater Charleston began its latest season of Y Girls Code by expanding to ten more clubs, with participants ranging from the third to twelfth grades at a variety of schools, libraries, and other locations across the Charleston region.

Any girl interested in technology who attends the above schools or is a Charleston County resident and are in a grade for which a club is available can participate. Girls at the above schools should sign up with their school or YWCA Greater Charleston to participate in the club for their grade, and Charleston County residents should contact one of the above libraries to sign up for a club for their grade. The clubs take place after school or during other non-school hours.

The new clubs are part of a long-term plan at YWCA Greater Charleston. While its original club, held at Sanders-Clyde Creative Arts School, a school with a high percentage of low-income students of color, sought to start middle school girls on a financially empowering career path, the nonprofit then began to expand the club to girls of other ages.

“We originally intended to expand the program to girls in other middle schools and high schools across the Charleston region,” said LaVanda Brown, executive director of YWCA Greater Charleston, “so that girls who began attending a club in middle school could continue through their high school careers, learning more advanced skills, honing their interests, and continuing to build relationships with other girls and women in technology.”

The girls from the original Sanders-Clyde Y Girls Code club are still active with the organization, Brown said.

In launching its ten newest clubs, YWCA Greater Charleston partnered for a second time with Kids on Point and the City of North Charleston Recreation Department, and expanded its existing partnership with the Charleston County Public Library to encompass Y Girls Code.

To schedule an interview or visit one of the Y Girls Code clubs, contact LaVanda Brown at [email protected] or 843.722.1644.

For 112 years, YWCA Greater Charleston has worked to eliminate racism and empower women in Charleston, Berkeley, and Dorchester Counties. A historic local association of YWCA USA, one of the oldest and largest multicultural women’s organizations in America, it seeks to create opportunities for personal growth, leadership, and economic development of women, girls, and people of color. Its annual 10-day Reverend Dr. Martin Luther King, Jr. Celebration is one of Charleston’s longest running events. In 2016 it brought the first Girls Who Code club for middle school girls to Charleston; its subsequent Y Girls Code program has since expanded to female students of all ages. In 2017, it brought the Racial Equity Institute, an ongoing program, to Charleston to help local leaders understand and address racism in the community. In 2018, it introduced What Women Bring, an annual power lunch attended by hundreds to celebrate and empower South Carolina’s women in business, community, and culture. For more information, visit ywcagc.org.