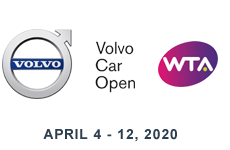 Fan favorites Bertens and Goerges will compete in Charleston for the fifth and seventh time, respectively

Bertens and Goerges met in the final match of the 2018 Volvo Car Open, where Bertens was ultimately victorious. They currently hold a 2-2 head-to-head record and recently played one another in the US Open’s third round, with Goerges winning that match.

“It’s a great feeling getting to welcome beloved players back to our tournament,” said Eleanor Adams, Volvo Car Open Tournament Manager. “Kiki and Julia are two of the most talented players on tour, and they’re also two of the kindest. We are thrilled to host them again next year. Who knows – maybe one or both of them will appear in our final again!”

World No. 8 Bertens ascended into the WTA’s top 10 months after winning the 2018 Volvo Car Open. She has remained a fixture in the top rankings since her victory in Charleston. Bertens has won two tournaments in 2019, bringing her career wins to nine.

So far this year, she has captured the titles in St. Petersburg and Madrid, reached the finals in ‘s-Hertogenbosch and Palermo and reached the semifinals in Sydney, Stuttgart, Rome, Eastbourne and Beijing. The 2020 Volvo Car Open will be Bertens’ fifth time competing in Charleston, where she holds a 9-3 win-loss record.

“I always enjoy playing in Charleston and look forward to the tournament even more since winning the title,” said Bertens. “I have been working really hard on my game and am hoping to be back in the final of the Volvo Car Open next year.”

Goerges earned her seventh career title this year in Auckland. She also reached the finals in Birmingham, quarterfinals in Doha and the fourth round of the US Open in 2019.

She is the 2018 Volvo Car Open finalist and a 2011 quarterfinalist. The 2020 Volvo Car Open will be her seventh time competing in Charleston, where she holds a 9-6 record.

“The Volvo Car Open is one of my favorite tournaments. I have had good results in Charleston and love playing in front of such a fun and supportive crowd,” said Goerges.

The Volvo Car Open will celebrate its 20th year in Charleston in 2020. The tournament relocated to Charleston from Hilton Head Island, where it was held from 1973 – 2000.

The nine-day Volvo Car Open is the largest women’s-only tennis tournament in North America. The event attracts an average of 90,000 attendees and more than 100 of the top singles and doubles tennis players to Charleston every year.

Patrons have the option to choose from individual tickets, ticket packages and travel packages. Ticket prices range from $25 for an individual session to $540 for an all-inclusive weeklong package with complimentary access into a private hospitality suite. The Volvo Car Open also offers packages that include premium seats, ticket savings and membership into the tournament’s Ace Club.

For more information on the tournament and ticket options, visit volvocaropen.com or call 843.856.7900.

About the Volvo Car Open

The Volvo Car Open is North America’s largest women’s-only tennis tournament. The event, formerly known as the Family Circle Cup, moved to Charleston, S.C., in 2001 from Hilton Head Island, S.C., and will celebrate its 48th tournament in 2020. The Volvo Car Open welcomes more than 90,000 spectators each year. The tournament features a singles draw of 56 players, a qualifying draw of 32 players and a doubles draw of 16 players. In conjunction with Tennis Channel and WTA Media, the Volvo Car Open is showcased from the first ball struck in main draw competition to the last ball played in finals, throughout the U.S. and 174 international partners. The tournament receives more than 100 hours of tennis coverage; live from Charleston, broadcast across the globe to millions of fans. The tournament is operated by Charleston Tennis, LLC. For more information on the Volvo Car Open, visit http://www.VolvoCarOpen.com, call (843) 856-7900, email [email protected], Facebook (Volvo Car Open), Twitter (@VolvoCarOpen) or Instagram (VolvoCarOpen).