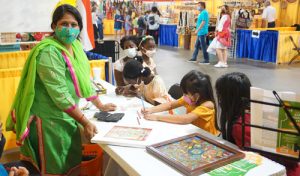 The community came out in force for the 2021 Columbia International Festival, one of the first such large events held locally since the start of the pandemic, at the State Fairgrounds on June 5th and 6th.

The crowd over the two days was conservatively estimated as at least 8,000 people, according to Raj Aluri, who founded the Festival 26 years ago. This event counted as both the 25th and 26th, since it had to be called off last year due to the coronavirus.

Dr. Aluri said he knew when he arrived Saturday morning and saw all the people waiting outside that the event would be a success. There was a steady flow all day after that. “All the food vendors were very happy,” he reported. Most of them sold out both days.

Many in the crowd told him how excited they were to have the event back after the year off.

“People were ready for it,” he said. “It was a good thing for the community for this to come together.”

And he meant “community” in a completely inclusive sense. The event is particularly exciting for the many people in the community who were born in other countries. But they were not the only ones who attended. Dr. Aluri estimated that the crowd was about half foreign-born, but half native.

Those who attended enjoyed a wide variety of cultural displays, activities and of course food, representing about 100 different cultures from around the world. They saw cultural performances on a stage, an international fashion show, an Olympics-style parade of flags, demonstrations of activities from other countries, and had the chance to buy authentic souvenirs of many countries in the bazaar.

The turnout was particularly encouraging given this particular moment as society has started coming out from under the pandemic. It happened in spite of so many of our neighbors either being afraid to come out into a crowd on the one hand, and others who are uncomfortable with masks and social distancing on the other. (Masks were required indoors at the event, while part of the festival was moved outside for a change.)

The festival in past years has attracted about twice what it did this time, and organizers look forward to next year being as big as ever. The 2022 Festival will occur on April 2nd and 3rd, and Dr. Aluri urges everyone to go ahead and put it on their calendars!

To learn more about the Festival, visit https://www.cifonline.org/.

About the Columbia International Festival

The Columbia International Festival showcases the music, culture, food and performing arts of the various cultures, nationalities, races and language groups represented in South Carolina. Since 1996, the event has brought together all of the area’s international communities to build better relations between various groups and with the South Carolina community at large. For more information, visit https://www.cifonline.org/.