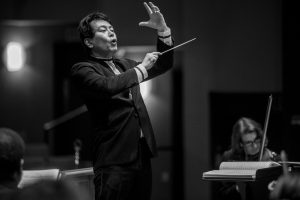 One Columbia for Arts and Culture has announced Morihiko Nakahara, the Music Director and Conductor of the South Carolina Philharmonic, as the recipient of the 2021 Stephen G. Morrison Visionary Award.

The Stephen G. Morrison Visionary Award is an annual recognition of a Columbian who reflects many of the values and qualities of those generously given by One Columbia’s former leader in support of the growth and vitality of his City of Columbia. Morrison, who passed away in 2013, co-chaired the One Columbia Arts and Culture Board of Directors for three years.

A native of Kagoshima, Japan, Nakahara holds degrees from Andrews University and the University of Cincinnati College-Conservatory of Music. Known for his charismatic presence on and off the podium, innovative and audience-friendly programming skills, and thoughtful interpretations of both standard and contemporary repertoire, Nakahara was featured in the League of American Orchestra’s prestigious Bruno Walter National Conductor Preview in March 2005. Equally at home in a wide variety of musical styles and concert formats, Nakahara has collaborated with Chris Botti, Béla Fleck & the Flecktones, Edgar Meyer, Brandi Carlile, Pink Martini, and Sergio Mendes to name a few.

The 2021-2022 season marks Morihiko Nakahara’s 14th season as Music Director of the South Carolina Philharmonic, and he also serves as Director of Orchestral Studies at the University of Massachusetts Amherst and Resident Conductor of the Spokane Symphony Orchestra.

“I am incredibly honored and humbled to receive this award, on behalf of the entire team of musicians, administrative staff, board members, tech crew, and our loyal audience members near and far,” said Morihiko Nakahara. “The Covid-19 pandemic taught us to be patient and nimble, but the level of trust that our orchestra’s stakeholders and constituents have for each other and the passion with which they embody their roles have allowed us to be bold and ambitious during this time. This honor is especially meaningful for me on a personal level, because in the few years I knew and interacted with Steve Morrison, I was always inspired and energized by his tireless advocacy for the arts in Columbia and for equal access to arts education and enrichment in every community. Steve’s vision is our mission, and I am blessed to continue working in Columbia’s vibrant arts community for all people.”

“When I led the search committee to find a new Music Director for the SC Philharmonic,” explains Gail Morrison, wife of Steve Morrison and devoted supporter of the SC Philharmonic, “the applicant pool was large, diverse, and incredibly talented. At first, I despaired that the committee would ever be able to reach consensus. But after we watched the video that Morihiko had submitted, the committee unanimously recommended that he progress to the interview stage. The rest is history. Morihiko is a young, dynamic and charismatic music director. He takes his music, but not himself, seriously. His knowledge of repertoire is extensive, allowing him to program new music, international music, and forgotten pieces by women or African Americans alongside the well-loved traditional repertoire. Morihiko is a master storyteller whose preconcert talks bring composers alive and reveal the intricacies of the music. He has an extraordinary sense of playfulness and fun which make rehearsals lively. His abilities as a conductor have strengthened the orchestra and prepared it for more difficult repertoire.”

“Morihiko was selected as the 2021 Morrison Award recipient based on his significant contributions to the arts in our city through the creativity and flexibility demonstrated throughout his tenure at the SC Philharmonic, and more specifically during the coronavirus pandemic,” states Paul Medlin, One Columbia’s Board Treasurer. “He has expanded the SC Philharmonic outside of traditional venues and repertoires with performances at hospitals and on city streets and through programs such as the Harry Potter series, which has increased accessibility and expanded the SC Philharmonic’s audiences. During the pandemic, this creativity and flexibility allowed programming to thrive, while also keeping musicians employed.”

The recipient of the Steve Morrison Visionary Award honors the best combination of vision and leadership, applied to arts and history and the entire cultural foundation of the City, and the value they bring to Columbia.

“Over the fourteen years that Morihiko Nakahara has shared his pioneering vision as Music Director and conductor for the SC Philharmonic, he has served as an ambassador for culture and music, as well as advocate for the growth of our city’s fine arts and humanities environment,” said Mayor Steve Benjamin. “Morihiko truly embodies the traits recognized by The Stephen G. Morrison Visionary Award, through his commitment to furthering the artistic vitality of Columbia.”

An event is being organized to present Mr. Nakahara with the award and is expected to be held in mid-January 2022. Details to come.

About One Columbia for Arts and Culture

One Columbia for Arts and Culture is a non-profit corporation that works to promote collaboration among citizens, the cultural community, and city government through celebrations of Columbia’s arts and historic treasures. Its goal is to enhance the quality of life for our residents, attract tourist dollars to our city, and further build our vibrant community. In short, it serves as the promotional arm of the City for Columbia’s cultural community. Visit the One Columbia website (http://onecolumbiasc.com) for a continuously updated master list of art and cultural activities occurring throughout the city.