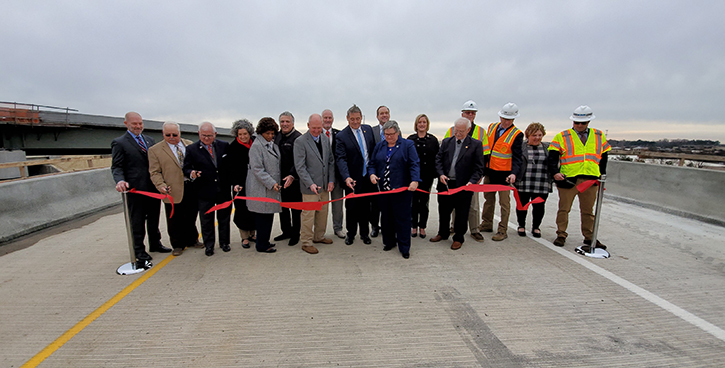 South Carolina Secretary of Transportation Christy A. Hall announced the opening of the final, new ramp of the 85/385 Gateway Project during a ribbon-cutting ceremony in Greenville on Friday, Dec. 6, 2019.

“We are excited to deliver the final configuration of this new, modern interchange to the more than 220,000 vehicles that currently use it daily,” Hall said. “A lot has happened since we broke ground on this project in February 2016. A dozen new bridges have been built, several new ramps added or modified and both I-85 and I-385 have been widened.”

Hall said, “We now have 6 lanes on I-385 all the way from the Simpsonville to Downtown Greenville and I-85 has been widened all the way to Pelham Road.”

In addition to making the highways safer and easier to navigate, the new interchange is vital for the continued growth of the Upstate and South Carolina.

The 85/385 Gateway Project is the first of three high priority interchanges that the South Carolina Department of Transportation has identified across the state for strategic investment.   The other two are Malfunction Junction in Columbia and 526/26 in Charleston.  “Bringing relief to the motoring public at these 3 pinch points in our interstate network is essential and our duty in meeting our mission to operate a safe and reliable transportation network for our citizens and businesses,” Hall said.

This project required a large team. The total cost of the project is approximately $300 million. Hall thanked SCDOT’s partners: the Legislature, local governments, federal government, State Infrastructure Bank, contractor Flatiron-Zachary, CECS, the Project Managers on the SCDOT Team, and the support of the SCDOT Commission.