The Laurens County Courtroom was not as full as in previous swearing in ceremonies, but the importance and significance of the day was not lost on those attending or the many people that Stumbo and his office have helped in his eight years as Solicitor. 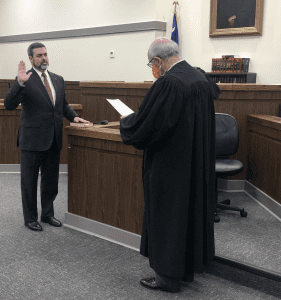 “I am just as excited and determined as ever to attack the new challenges that have been created for our law enforcement community and the court system from the events of the past year,” said Stumbo. “Now more than ever it is time for strength and commitment in the four counties of the 8th circuit, regardless of the uncertainty, chaos, and division that is currently gripping our nation.”

As 8th Circuit Solicitor, Stumbo serves as the chief criminal prosecutor for the four-county circuit which includes Abbeville, Greenwood, Laurens and Newberry counties.