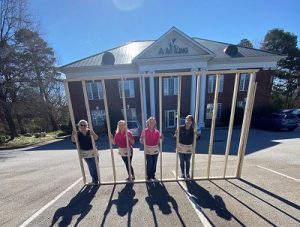 A M King architect Catherine Knight enjoyed volunteering with Habitat for Humanity of Greenville County pre-pandemic. When she heard about their virtual wall-building initiative this year, she rallied a team of her female colleagues in the company’s Greenville office to join 10 other local companies in kicking off International Women Build Week 2021 — an annual weeklong event created by Habitat’s Women Build program in partnership with Lowe’s. The 2021 event ran March 8-15, 2021.

Habitat staff dropped off the wall systems at A M King’s office on the designated day last week. In addition, Habitat provided a bucket with Women Build t-shirts, masks, gloves, hand sanitizer, nail pouches and tools. The women made quick work of their wall project and were ready when Habitat returned a day later to pick it up. Then the group attended a Happy Hour Zoom, where they were introduced to the future Habitat homeowner who would receive the wall systems for her house.

“It was a wonderful experience being able to bond with the women of A M King-Greenville and learn the finer points of building a wall together,” says Knight. “Our team assembled that wall in record time and wished we had another one to build. I feel very fortunate to be part of a company that values giving back to the community and actively encourages its employees to become involved in activities to support the community at large.”

“This was my first attempt at a Habitat build, but I’m confident it won’t be the last,” says Rita Gosnell, A M King project assistant. “The four of us got down to business and got it done, and I think the guys we work with were impressed with our success! We were able to personalize our work by signing our names and writing well wishes on the studs when we finished. It was a great sense of accomplishment because a family will benefit from this build.”

A M King makes community engagement a priority in all of its offices, as evidenced by strong partnerships with many other community organizations, such as 24 Foundation (24 Hours of Booty,); Starmount Academy of Excellence (Fill the Truck); and the Salvation Army of Charlotte and Salvation Army Serving Greenville, SC (Angel Tree Program). At each event and with every challenge, A M King is there to lend a hand — hard hats, warm hearts, masks and all.

A M King is an integrated Design-Build firm based in Charlotte, NC with offices in Greenville, SC and Chicago, IL. An employee-owned company, A M King consistently and successfully delivers quality projects throughout the United States. With an experienced team committed to protecting clients’ assets, the firm provides property consulting, design and engineering, construction, and facility services in key market sectors including food processing, food distribution, industrial manufacturing, and commercial properties.

Globally, economic turmoil caused by the ongoing COVID-19 pandemic has exacerbated an already tenuous affordable housing crisis and has impacted women-led households disproportionately, according to a recent Habitat for Humanity news report. As a result, substantially more women-led households have been forced to choose between rent or mortgage and other essential bills, such as utilities or health care.

According to Habitat’s website, “Our goal with Women Build is to empower women to help families build strength, stability and independence. We at Habitat have the ability to provide opportunities for hands-on learning, and given these tools, women can succeed in changing their communities.”