Part Two in a Series, Looking Back at the Thousand Year Flood

The rushing water had washed my concrete bird bath across the yard and slammed it into the corner. My garden bench hung off the fence. A breakfast-room stool rested upside down on top of a hydrangea. Trash bins and junk filled the flower beds. After the thousand-year flood that hit five years ago, my house and yard were literally a disaster. A few close friends started sorting through the mess in the garage. I was in the backyard by myself when a co-worker stopped by and told me I needed more help. I insisted we were fine. I’m so thankful he did not listen to me. Clearly, I didn’t have a clue.

At some point, he said he needed me in the front yard. We walked through the house and onto the porch to see my front yard filled with students and their families. As I thanked them for coming to help, my voice did not sound like my voice. The magnitude of the mess I had on my hands began to sink in. Other folks started to arrive. Some I knew. Some I didn’t. Volunteers formed human assembly lines to pass things across the front yard and into the roll cart and then to piles at the edge of the street. One hardworking ten-year-old pushed the wheelbarrow to the road and back all day. Many hands were busy helping me that day. 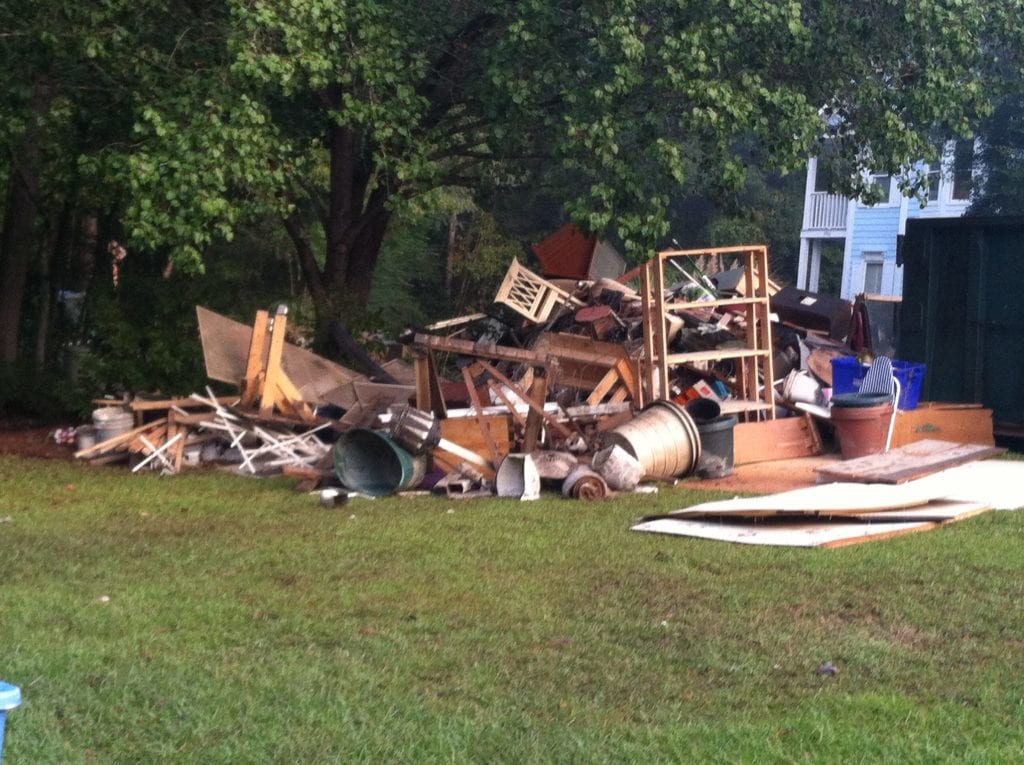 Another group worked in the back yard. A former student discovered my favorite planter, a foot tub my mother calls it, under a pile of trash. He brought it to me and said we could clean it up and it would be good as new. “Clean it up” became the theme of the day. A couple of fifth-graders hosed down china that had ended up in a flower bed, covered with mud. I heard a mother tell them to be careful because that china was important. Wedgewood, Lenox, and Gorham all used to matter to me, but not that day.

Two high school students worked carefully to remove all the window treatments. One apologized for scraping the paint on the dining room wall. He had no idea it was all to be gutted shortly. None of us knew what was to come.

Clean up went on for days, and not just at my house. All across the midlands, streets were packed with service vehicles and volunteers’ cars and metal bins and construction roll carts and piles of trash. Everything was a mess, but volunteers did what they could to help.

One day, I was in the street and a lady headed to my house stopped to chat. She had no idea who I was. She was hesitant to go into the yard. She said it was her first day volunteering. She said she felt awkward walking into a stranger’s house. She said it felt unnatural. She said she felt like an intruder. She said it was all too much, and she started to cry. I listened to her and hugged her. It was all too much, indeed. She cried. I consoled. It took some time before I could form a reply. Eventually, I told her yes, it was all strange, but I bet the family appreciated the help. I told her it would all be okay.

My daughter and I did need the help that day and for many days to come. Scenes like the ones at my house happened throughout the midlands. People helped friends and neighbors and strangers. They hauled off ruined items and salvaged what they could. They wiped down Christmas ornaments that could be saved and threw out the ones that couldn’t. They took photos out of albums and spread them on blankets to dry. They did what they could.

Five years ago, we all came together. Bumper stickers and magnets and t-shirts announced that we were “SC Strong.” In the days following October 4, 2015, that’s exactly what we were. We worked together. Teachers and students and friends and neighbors and even strangers all volunteered. We helped one another. We were strong.

Part One: Looking Back – The Day Columbia Flooded

Tammy Davis is a teacher and a writer finding lessons in everyday life.  She loves looking at her backyard to see her birdbath right where it is supposed to be and her garden bench sitting firmly on the ground. For more stories about the thousand-year-flood, visit tammydavisstories.com.