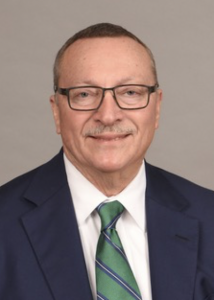 “I enjoy serving others through my real estate work and am extremely dedicated to adding value to my clients and community and building their trust,” said Smith.

A graduate from the United States Military Academy at West Point, Smith was commissioned an officer in the US Army Infantry. After completing Airborne and Ranger training, he served as an advisor to the South Vietnamese Rangers in Vietnam. He later received an Engineering degree from the University of South Carolina and completed the Public Utility Executive Program at the University of Michigan School of Business. He retired from SCE&G/SCANA after many years of service, primarily in the development and construction of new power plants.

Smith and his wife, MaryBelle, reside in Clinton. They have two daughters, Angela Hughes of Jacksonville and Emily Wilson (Reed) of Greenville; and five grandsons, Henry and Alexander Hughes, and Max, Abney and Crews Wilson. He is an ordained Elder at First Presbyterian Church of Clinton.