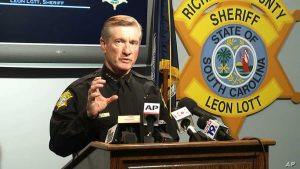 Richland County Sheriff Leon Lott is reminding all citizens of Richland County that June is ELDER ABUSE AWARENESS MONTH and that all should be increasingly mindful of elder abuse: What elder abuse is. What the symptoms are. What the warning signs are. And why the elderly, as a group, have unique vulnerabilities and susceptibilities to all forms of abuse.

Elder abuse – essentially the abuse, mistreatment and neglect of aged or aging people – is no less heinous and criminal than any other forms of abuse (i.e. child abuse, spousal abuse, the list goes on). But unlike other forms of abuse, elder abuse is often concealed by the most-clever abusers. It is far too often unreported by the abused victims, and for a variety of reasons.

“Seniors, in my estimation, are the heart of our community,” says Lott. “And we – both as law enforcement officers and the general public – must strengthen our resolve and commitment to preventing and eliminating the abuse of our elderly citizens; all of whom deserve to be loved, comforted, shielded from fear, and protected from harm.”

“I am encouraged to see that the Richland County Sheriff’s Department has established an Elder Abuse Awareness Team,” said Director Connie Munn, South Carolina Department on Aging. “Elder Abuse is a very real threat to so many of the most vulnerable members of our society. And it is something that my staff and I through the efforts of the Dept. on Aging take very seriously. We have to protect our elderly. As it has often been said, the elderly are one of our most precious living resources.”