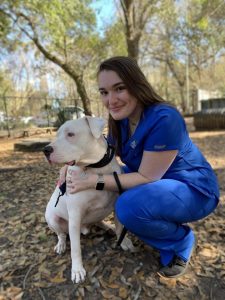 Pet Helpers proudly announced Alexis Kaul has been appointed as Shelter Manager of Pet Helpers Adoption Center. Graduating from Canisius College with a degree in Animal Behavior, Ecology and Conservation. Alexis began her career as the Humane Educator at the Bronx Zoo Camp, sharing her love of animals with the zoo’s youth programs. Kaul relocated to Charleston in January 2021, where she joined Pet Helpers in the role of Animal Behavior Manager, providing training and enrichment to the shelter animals, as well as initiating programs such as Junior Pet Helpers Summer Camp and Puppy Training Classes.

“Lexi has been an integral part of Pet Helpers since she was 10 years old, when her dedication to animals began as a Pet Helpers volunteer.” States Melissa Susko, Executive Director “We couldn’t be more excited for her to embark on this next phase of her career with Pet Helpers.”

Kaul will be focused on ensuring that Pet Helpers continues to increase its’ reach and impact within the community, expanding upon existing programs while being an advocate for the animals of the Lowcountry.

Pet Helpers Adoption Center and Spay/Neuter Clinic is a 501(c)3 dedicated to serving the animals and community across the Lowcountry. Since 1978, their mission is to end the euthanasia of all adoptable cats and dogs by keeping all animals until adopted, providing low-cost spay/neuter surgeries, offering humane education programs, pursuing animal-cruelty prosecution, and initiating animal-welfare legislation. For more information, please visit www.pethelpers.org.