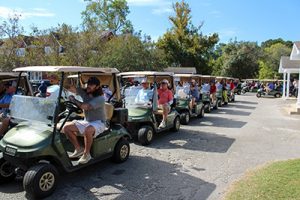 Through the help of volunteers and AllSouth team members, the Soldiers and Vets Charity Golf Tournament is dedicated to bringing awareness to and supporting local military causes in the Midlands. Since 1996, AllSouth Federal Credit Union has helped raise over $316,000 in support of local military charity organizations. “We proudly carry the tradition of supporting our military. Hosting this golf tournament allows us to show our continued support for the military and local organizations. It is part of our mission to give back and help make a difference in the communities we serve,” said Bill Koehler, AllSouth Federal Credit Union President & CEO.

Originally begun in 1960 as Fort Jackson Federal Credit Union, AllSouth Federal Credit Union is a not-for-profit financial cooperative. We proudly serve 9 counties with 23 branches in the Midlands of South Carolina. We’re not just your credit union, we’re your neighbors. AllSouth values the communities we serve, and we are dedicated to giving back. For more information, visit allsouth.org.

About The Big Red Barn Retreat