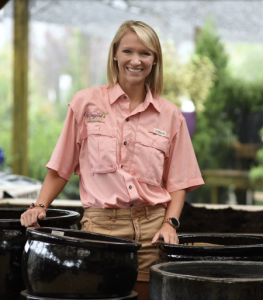 Wingard’s Market is excited to announce the selection of Andrea Snelgrove, Wingard’s Market Gift Shop and Merchandising Manager, for the Lexington County Chronicle’s 2023 Top 20 professionals under 40.

“Andrea is the General Manager of Wingard’s Market, responsible for day-to-day operations. In 2017, she was named National Young Retailer of the Year, by Green Profit Magazine. In 2019, she was also a member of the class of Leadership Lexington,” stated Wingard’s Co-Owner Wally Steinhauser.

This annual honor recognizes the outstanding work of 20 young professionals from across Lexington County who not only exemplify strong leadership skills but have also demonstrated a true commitment to serving the citizens in their city. Final selections are determined by popular vote combined with a selection panel setup by The Lexington County Chronicle.

Wingard’s is committed to beautifying and to sharing fresh, local produce with our community. Wingard’s Market joined the ranks of the horticulture industry’s top local garden centers when it was named one of Today’s Garden Center magazine’s Revolutionary 100 Garden Centers for 2015 and named one of the Top 100 Garden Centers by Garden Center Magazine in 2017. Wingard’s customers are encouraged to visit the Gift Shoppe and Fresh Produce Market or take a stroll under century-old pecan trees through the Garden Wonderland.