The Arnold Companies, a Columbia-based commercial development firm, has begun construction on the first new residential tower in the central business district located at the corner of Lady and Assembly Streets in downtown Columbia.  This block, which previously housed Moe Levy’s and Howards Sports, will soon be home to 83 urban residences known as The Palms on Lady. 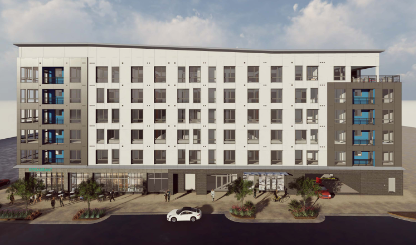 The Palms on Lady will be offering urban living with convenient access to the central business district, the University of South Carolina, the Vista and the Statehouse.  The Art Deco design of the exterior will serve as an enhancement to Columbia’s modern skyline.

The Palms on Lady will have amenities including concierge services, covered parking for residents, a state-of-the-art fitness center, a Luxer package room, tropical pool, business center, and a luxurious top floor club lounge with a covered balcony.  In addition, there will be 2,801 square feet for future restaurant/retail space on the ground floor of the building.

The Palms on Lady offers a variety of floor plans with studio, one and two bedrooms, ranging in size from 466 to 1,172 square feet, with 10’ ceilings on the top floor. Each home has contemporary finishes, modern designer flooring and lighting, quartz countertops and energy efficient appliances. The building boasts wide corridors and elevator access to all floors with designer décor in all common areas.  The Palms on Lady is scheduled to be completed by the first quarter of 2022.

The Palms developer, Ben Arnold says, “During the darkest days of the Great Depression, Rockefeller broke ground on Rockefeller Center. Also, the Empire State Building was announced August of 1929. These owners/developers believed in America’s future and so do I.”

The Palms on Lady is an Arnold Companies signature development.  MB Kahn is the construction company working in conjunction with Arnold Companies, as the developer and Cline Design Associates as the architect and design company.

Arnold Companies is one of the most diverse owners and developers of commercial and multi-family properties in the Southeast. The organization designs and builds properties that vary from traditional commercial real estate to mixed-use entertainment complexes, to neo-traditional town centers, multi-family housing and marinas.