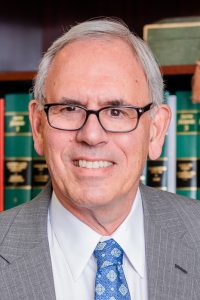 COLUMBIA, SC – Keith Babcock, a founding member of the law firm Lewis Babcock, is listed in the just-released 2022 edition of “Best Lawyers in America.”

Babcock has been included in every edition of the national guide since 2007. He’s honored this year in two practice areas: Eminent Domain and Condemnation Law and Legal Malpractice – Plaintiffs.

His practice consists almost entirely of litigation, with a focus on eminent domain and professional negligence.

Based entirely on peer review, “Best Lawyers” aims to capture the consensus opinion of leading lawyers about the abilities of their colleagues within the same practice area and same geographic region.

The selection process begins with a nomination from a colleague and then peer review from attorneys previously recognized in “Best Lawyers.” Independent research also is conducted.

Founded in 1984, Lewis Babcock is a litigation law firm with a statewide practice and national reputation. Frequently called upon to serve as local counsel in large, complex cases, the firm’s attorneys have significant experience representing plaintiffs and defendants. Practice areas include business disputes, professional negligence, and eminent domain. Learn more at https://www.lewisbabcock.com