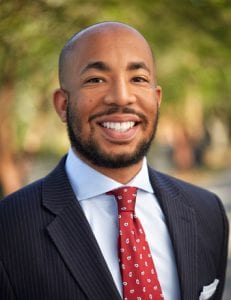 Senator John McCain notably stated that “Courage is not the absence of fear, but the capacity to act despite our fears.” He understood that the ability to act despite knowing the potential political ramifications of those actions embodied real courage, instead of elected leaders that acted because they felt absolutely no fear at all. Today’s world – whether local, state, or federal government – could always use more of that courage.

The world is more complex than ever, and “labels” that used to exist are disappearing. While we may still try to define ourselves by party, within those parties we are more diverse in thought and ideological affiliation than ever. Perhaps we are concerned over very specific fiscal issues, which potentially present themselves as conservative thoughts. Or, we are concerned over varied social issues, which may present themselves as liberal thoughts. And, we are all over the spectrum in between.

Whether you and your business engage with our government due to regulatory mandates, various professional or personal reasons, the ability to network with those who differ in political ideology is essential.

The reality is most of America’s governmental institutions are comprised in a manner that require you build a relationship with someone who thinks differently than you. What is truly interesting, is that this applies both in politics and in business.

In order to find success, no matter in business or in politics, you have to practice finding the common denominator. At its core, what do we have in common? What prevents them from potentially supporting my cause…. or in business, supporting a new product, project or development?

Before you can answer these questions there is one thing you must do…get to know the person on the other side. Relationships must be built on trust. In business, in politics and in life, your word is everything. So, as you get to know someone, you build that relationship, you can tear down differences, work through challenges, gain their support of something, because they respect and trust your vantage point.

The last point that is important to grasp is sometimes working through differences requires understanding that some differences cannot be overcome, but they all must be appreciated. You won’t always be able to change someone’s mind, get them to agree with you, or ultimately get the issue or resolution that you hope for, however, it is important to keep it all in perspective.When issues arise down the road, you’ve got a greater opportunity to find that common denominator and work collaboratively together.

Sam Johnson represents clients before governmental agencies and in matters stemming from government action, and has developed a reputation for his skill in crisis management and navigating issues. Prior to joining Nexsen Pruet, Sam helped lead the office of the Mayor under Mayor Stephen K. Benjamin. And, while Sam has affixed himself as a staple of the South Carolina political landscape, he has also developed extensive relationships with elected officials and business leaders across the country. Along with the work he does as a member of the NP Strategy team, Sam is a Advisor for Nexsen Pruet’s Public Policy team.