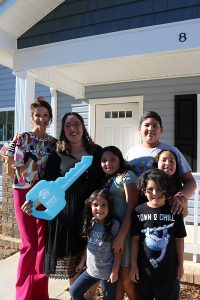 Bon Secours Wellness Arena and Habitat for Humanity of Greenville wrapped up their 3rd annual house build with a dedication ceremony last week. During the event, Natalia Mayley and her five children received the keys to their brand-new home in the Woodside Park neighborhood, a new Habitat neighborhood located in the historic Woodside Mill Community of Simpsonville. The Arena staff and community volunteers began building the home back in May of this year. Construction began inside The Well and was later moved to its permanent location at Woodside Park once the framework was completed. In addition to The Well, build partners included AFL, Harley-Davidson of Greenville, KW Beverage, Levy Restaurants, Pepsi of Greenville, Spero Financial, Spinx, and Wells Fargo.

Bon Secours Wellness Arena’s partnership with Habitat for Humanity of Greenville is part of The Well’s STAGE initiative and their commitment to give back through impactful initiatives and broad support of community and charitable organizations.