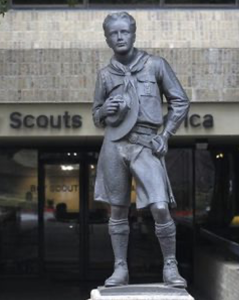 After returning to the office to the Coastal Carolina Council of the Boy Scouts of America, staff discovered that a long treasured life size bronze sculpture designed by the famous sculptor, R. Tait McKenzie, was stolen over the Memorial Day holiday weekend.   The bronze statue was cast in 1937 and has been a corner stone to the scout office for decades.

“Staff members at the office are in a state of shock and dismay”, said Jason Smith, Scout Executive.  “I really can’t believe that someone would have stolen this beautiful statue for the value of the bronze.  It is irreplaceable.”  Chris Staubes, council president, has been notified and is perusing all channels to attempt to recover this statue.  The police have been called to investigate the case.  “We are asking any of the adjacent businesses if they might have any camera footage of the incident to notify us immediately as we are so worried that the thief will try to take it to the scrap yard for shredding or melting”, said Smith.

Dr. Bobby Baker, board member and long time scouter, has volunteered a $1000 reward for the arrest and conviction of the thief.  Anyone with any knowledge of the person who may have stolen the statue or it’s whereabouts are asked to call the scout office at (843) 763-0305.    Any person with information shall remain anonymous if they so desire.