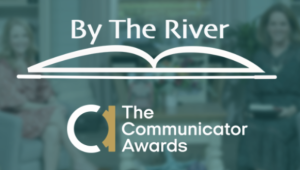 Season 4 recognized with Award of Distinction

South Carolina ETV (SCETV) today announced that Season 4 of its weekly, 30-minute, literature-focused series, By The River, received an Award of Distinction from the 28th Annual Communicator Awards in the Film/Video-Talk Show/Interview category.

Founded nearly three decades ago, the Communicator Awards is dedicated to recognizing excellence, effectiveness and innovation across all areas of communication. The organization received over 4,000 entries from companies, agencies and studios, making it one of the largest and most diverse awards shows of its kind.

The Award of Distinction is presented for projects that exceed industry standards in quality and achievement. The Communicator Awards is sanctioned and judged by the Academy of Interactive & Visual Arts, an invitation-only group consisting of top-tier professionals from acclaimed media, communications, advertising, creative and marketing firms.

In 2022, By The River began being distributed nationally by American Public Television (APT) to viewers across the U.S. Each week, By The River presents in-depth interviews with Southern authors, ending with a Poet’s Corner that features Southern poets reading their poetry set to illustrations by Southern artists. By The River is filmed on a Bronze Telly Award-winning set at ETV Lowcountry in Beaufort, S.C.

Achieved in partnership with the University of South Carolina Beaufort (USCB), the entire crew for the show consists of USCB Communication Studies students. Thirty-four USCB students have worked on By The River over the past five years, majoring in Communication Studies, English, Media Arts and Interdisciplinary Studies. The show is hosted by Holly Jackson, Director of Operations and Content at ETV Lowcountry and is produced by Dr. Caroline E. Sawyer, Associate Professor of Communication Studies at USCB.

For more information and to view details on all 2022 winners, visit the Communicator Awards website.

“By The River perfectly depicts the value that public media can bring to a community. As a collaboration with USCB, this project offers students an experience they can’t get anywhere else in South Carolina, and I’m proud to see all their great work recognized in this way.” –SCETV President and CEO Anthony Padgett

“It’s exciting that others are recognizing the success of this unique partnership between SCETV and USCB. It’s a win for both of us and honors like this motivate us to get more creative as we grow.” – Host of By The River Holly Bounds Jackson