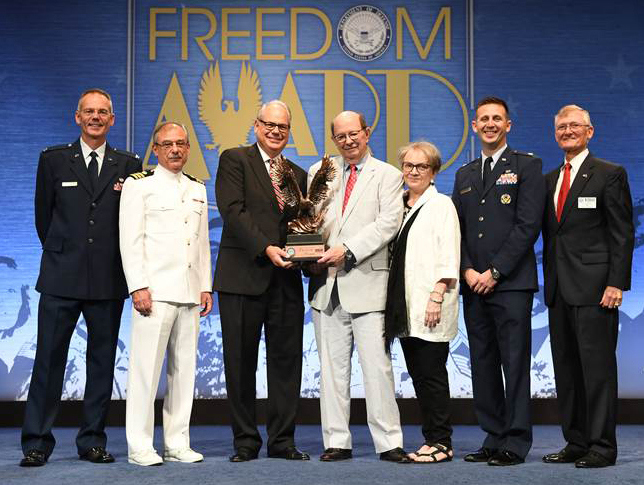 Columbia law firm Callison Tighe is one of 15 businesses from across the country who received the 2019 Freedom Award given by the Defense Department’s Employer Support of the Guard and Reserve (ESGR). This award is the nation’s highest recognition given to employers for their support of their employees who serve in the United States National Guard and Reserves.

Callison Tighe and the other recipients were honored with the Freedom Award in a ceremony at the Pentagon on Aug. 23.

The law firm had already received the ESGR’s highest state-level honor, the “Pro Patria” Award, for its support of the Guard and Reserve. Callison Tighe then became one of 30 finalists nationally, out of 2,415 nominations, for the 2019 national Freedom Award, which recognizes employers who have, through their leadership and practices, made it easier for employees to participate in the Guard and Reserve.

Callison Tighe Members Mike Tighe, Rick Detwiler and Louis Lang were at the Pentagon ceremony to receive the award, along with associate Maj. Ian T. Duggan, who also serves in the South Carolina Air National Guard.

“We are immensely proud of this national award, and even prouder of those, like Ian, who continue to volunteer for military service. Our firm has deep roots in the military and a long tradition of supporting those who have served,” said Callison Tighe Managing Partner Mike Tighe, who served as an active duty Air Force officer in Korea, and later as a judge advocate with the South Carolina Air National Guard.

Eli Wishart, the S.C. ESGR State Chair, congratulated Callison Tighe. “We are grateful that so many South Carolina employers support the Guard and Reserve, and we are thrilled that Callison Tighe has been recognized nationally for its consistent support over the years.”

In his remarks at a reception at the Army Navy Country Club the evening before the Pentagon ceremony, Mr. Tighe noted that all three named partners in the firm served on active duty during years when our country was at war. In addition to Mr. Callison,