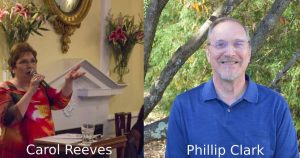 Carol Reeves, founding board member, has officially retired as CEO/Executive Director from Just Say Something, effective December 31, 2022. Since the mid 80’s, Mrs. Reeves has led the organization as its visionary leader, guiding the organization through several name changes, starting as Greenville Families in Action, then Greenville Family Partnership, and, most recently in 2018, to Just Say Something. While the organization has changed names, the mission has remained the same, to educate the community about the dangers of tobacco, alcohol, and other drugs. In recent years, Just Say Something started providing services for the Hispanic community through the Strengthening Families Program and Parenting Wisely.

Mrs. Reeves has received The Order of the Palmetto, the highest honor awarded to civilians by the Governor to South Carolinians who demonstrate extraordinary lifetime achievement, service, and contributions of national and statewide significance; served as National Red Ribbon Chairperson for and President of National Family Partnership; and been the recipient of accolades from South Carolina Governors dating back to the Honorable Richard Riley and from Presidents, Ronald Reagan, George H. W. Bush, Bill Clinton, and George W. Bush for her lifelong commitment to parents and youth across South Carolina and the nation. Even in her retirement, Carol remains committed to the work of Just Say Something and looks forward to continuing her support.

Phillip Clark has been named by the board of directors to serve the organization as CEO/Executive Director, effective January 1, 2023. Phillip started working for the organization in 1992 and most recently served as the Associate Director, overseeing all fundraising events/activities, and the Strengthening Families Program in both Greenville and Spartanburg Counties. Phillip, former President of the South Carolina PTA, has served on the National PTA Board of Directors and is an Adverse Childhood Trauma (ACE’s) Master Trainer. He has also served on multiple local, state, and national boards/committees and is currently serving on several local committees. Under Phillip’s leadership, he looks forward to continuing to build upon the foundation set by Mrs. Reeves while expanding the organization’s partnerships, programming and support for youth and families in the community.

For more information on Just Say Something’s programs and services, call 864.467.4099 or visit their web site at https://justsaysomethingsc.org.

About Just Say Something

Just Say Something is a non-profit, 501(c)3 community organization founded in 1984 whose mission is to encourage youth, parents, and communities to have open, honest, and ongoing conversations about alcohol, tobacco, drugs, and other risky behavior. For more information, call 864.467.4099 or visit our website at https://justsaysomethingsc.org.