The Cayce Police Department announces Sabrina Todd as Administrator of the Year. Todd, an asset to the department, has taken initiative in solving potential problems before they arise. She continues to increase the efficiency of the organization in creative and insightful ways. 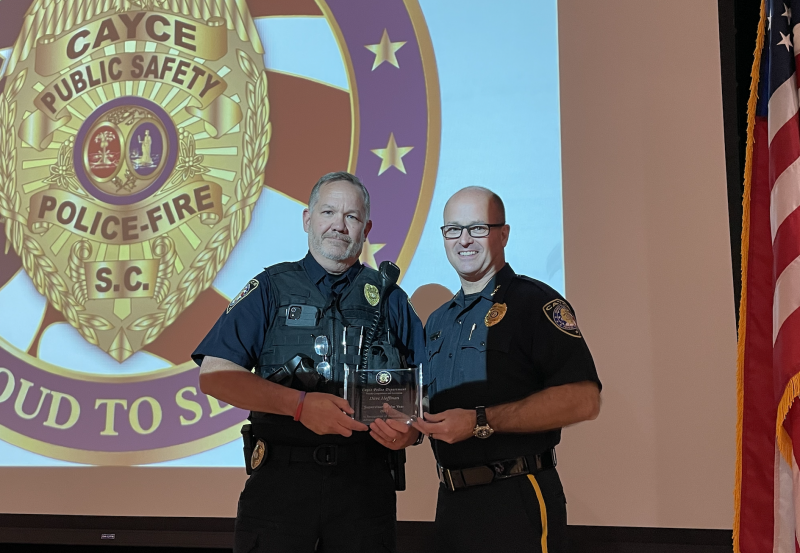 Vinton “Gill” Gillerson has been named the 2021 Rookie of the Year. Gillerson displays a hard work ethic and exceeds the expectations of a traditional rookie officer. Gillerson is a team player who routinely offers assistance to other officers and accepts extra assignments when necessary.

Donta Stewart has been named the 2021 Investigator of the Year. Donta takes the initiative and responsibility to work difficult cases. Inv. Stewart asserts a subtle, yet steadfast form of leadership that his fellow investigators have come to depend on. He has demonstrated a willingness to assist others, including younger, less-experienced officers and investigators.

The Cayce Police Department announces Lieutenant Dave Hoffman as Supervisor of the Year. Hoffman (photo attached) exemplifies the qualities of a true leader by offering others assistance, answering questions, and providing guidance. Hoffman holds his people accountable by setting high standards, which improves the officers’ quality of work.

Anthony “Tony” Branham has been named as the Cayce Police Officer of the Year. Branham has an incredible sense of attention to detail and fully utilizes sources of information and criminal intelligence to its full potential. He consistently applies this information in an effective way that results in closing cases by arrest that have gone cold.

Finally, Drew Creed has been awarded the prestigious J. Edgar Hoover Award. Creed sought out education and training in order to improve himself. Creed takes initiative in his training and is able to share it with others. His dedication and professionalism allow him to be given this distinguished award.

Sgt. Eddie Powell was presented with a flag that flew over the department in his honor, his service weapon, and a challenge coin plaque, upon his retirement.

Cayce Police Chief, Chris Cowan, stated, “One of the best things we do as leaders is recognize the work of our team members. The hard part is singling out a few when you are surrounded by dedicated and professional officers and staff. The awards, voted on by Department employees, included several distinguished awards such as Officer of the Year. The J. Edgar Hoover Award was nominated on by a citizen. We are proud of the work these men and women do each and every day, and we are honored to celebrate each of them.”