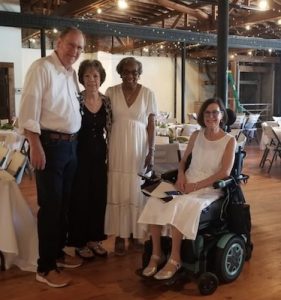 The luncheon brought together many groups in Laurens County including African American, Hispanic, Native American, White, and others.  Those groups came from Gray Court, Clinton, Waterloo, Fountain Inn, Cross Hill, Laurens, Ware Shoals, and more – 170 women and men, young and old. All met in the Laurens County Museum Magnolia Room on Saturday, June 4, 2022, at 11:30 AM, to dine together, meet others from all over Laurens County, and to sow a spirit of cooperation and service between those elected and otherwise.

The luncheon coincided with the ribbon cutting and grand opening of the Smithsonian Museum on Main Street Exhibit “Voices and Votes, Democracy in America” which will be at the Laurens County Museum until July 16.  Hours to view the exhibit are Tuesday through Saturday 10:00 AM until 3:00 PM.  It is free and open to the public.

Two representatives from the SC Humanities Council, TJ Wallace, and Alice Copeland, attended the luncheon and were delighted with the fantastic response by Laurens County citizens to the opening of the Smithsonian exhibit and the museum’s first related event.  SC Humanities is a major sponsor of “Voices and Votes, Democracy in America”, and administers the Museum on Main Street traveling Smithsonian Exhibit Program in South Carolina.

Mistress of Ceremonies, and a member of Laurens City Council, Cassandra Campbell quoted noted US Congresswoman Shirley Chisholm when she said, “Service is the rent we pay for living on this earth.”  Mrs. Campbell is the perfect example of a grassroots effort to lead and serve in her community.  She is a teacher, a small business owner, and was elected to City Council as a write-in candidate.

Laurens County Museum Executive Director Laura Clifford spoke of the honor of Laurens County playing host to the Smithsonian exhibit and invited everyone to visit and see this extraordinary display about the United States. Group tours of the museum are available with advance notice.  She encouraged people at the luncheon to participate in the Laurens County Stories project which will record oral histories from Laurens Countians.

Ms. Lynne West, Director of Voter Registration in Laurens County, spoke in glowing terms about the new voter bill just signed into law in South Carolina.  The bill makes it harder to vote by mail, but much easier to vote in person.  Other program speakers were Laurens County Council Member Diane Anderson, Alicia Gagin, Linda Lister, Laurens City Council Member Marian Miller, previous Clinton Mayor Myra Nichols, Leni Patterson, and Waterloo Mayor Barbara Smith.  All spoke of their choosing and accepting the opportunity to serve in Laurens County, and what they have learned in that process. Mr. Eli Lauer, pianist, entertained for the opening of the exhibit and the luncheon.

Luncheon Committee Chairman Elma Morrison spoke last and thanked everyone for taking time to be a part of something special for Laurens County.  The Committee is making plans for 2023. She encouraged everyone to visit, volunteer for, and support the Laurens County Museum.  All were prompted to bring their family and friends to the “Voices and Votes” exhibit.  Some will remember events described and exhibited with interactive kiosks.  Other events described occurred over 250 years ago before the Revolutionary War.  Mrs. Morrison thanked the sponsors for the luncheon – Laurens CPW, the City of Clinton, the City of Laurens, Laurens County Council, and Victory Insurance Company, LLC. 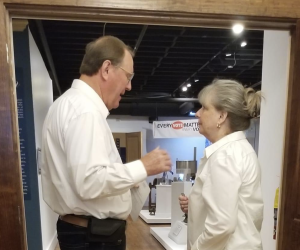 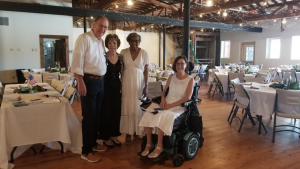 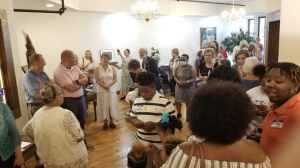