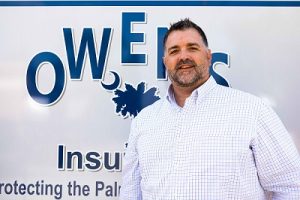 Owens Insurance Agency, an independent insurance agency with a 70-year presence in the Upstate, has promoted Chad Hannon, CLCS, to Market President for the agency’s home office in Greer. In this role, Hannon will focus on continuing to grow the commercial side of the business, which accounts for about 70 percent of the agency’s client mix.

Hannon joined Owens Insurance as Executive Vice President of the Commercial Division seven years ago. Since that time, the agency has expanded both its product offerings and its geographic footprint across the Carolinas.

“When Chad came on board in 2015, we knew we were bringing a Greer native back home. He has consistently been a top producer in our agency, regionally and nationally – and has been an asset to the entire office, providing support and mentorship to other team members. Thus, it was a natural transition to promote him to Greer Market President and we are excited to have him lead our team and steer our growth into the next decade,” said Chris Crist, Co-owner of Owens Insurance Agency with business partner Shane Lynn.

“I can’t say enough about the integrity of Owens Insurance and the agency’s longevity in the community. The growth in the Upstate and specifically Greer, has given me the opportunity to continue to grow our business footprint personally and as an agency. Owens Insurance has allowed me to stay connected to my roots – and for that I am extremely grateful. It takes a special group of people to maintain a ‘Main Street mentality’ while growing at such a fast pace,” said Hannon.

A licensed agent for more than 25 years, Hannon began his insurance career in his hometown with The Greer Group Agency. There he gained invaluable experience as he was introduced to all aspects of the business, assuming new roles and responsibilities along the way. After accepting a career opportunity in Spartanburg, Hannon became a top-producing State Farm agent in the state of South Carolina, which ultimately led to ownership of his own State Farm agency in the Greater Charlotte area from 2008-2015.

After graduating from Greer High School in 1990, Hannon attended East Carolina University on a football scholarship. Despite debilitating knee injuries that took him out of the football program, Hannon finished his degree at East Carolina in 1995. It was at East Carolina that he met his future wife, who is a manager at Prisma Health Greer Memorial Hospital.

Active in the community, Hannon belongs to Business Networking International (BNI) Greer, participates in the Greater Greer Chamber, and regularly serves as a Meals on Wheels volunteer through Greer Community Ministries. Hannon is involved with local high school athletics and serves as the announcer for Greer High School sports.