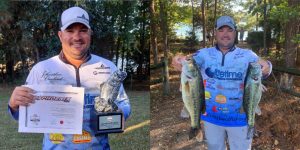 Pro Johnathan Crossland of Chapin, South Carolina brought a three-day total of 15 bass to the scale weighing 43 pounds, 12 ounces to win the Phoenix Bass Fishing League Regional Championship Presented by T-H Marine at Lake Murray. For his victory, Crossland earned $61,500, including a Phoenix 819 Pro bass boat with a 200-horsepower Mercury outboard and $10,000, along with lucrative contingency awards, including up to an additional $7,000 Phoenix MLF Bonus. Crossland also received automatic entry into the 2022 Phoenix Bass Fishing League All-American Championship, June 2-4, at Lake Hamilton in Hot Springs, Arkansas, as well as priority entry into the Toyota Series – the pathway to the Tackle Warehouse Pro Circuit and ultimately the Bass Pro Tour.

“Leading up to the off-limits the offshore bite was really good,” said Crossland. “I was catching 15 to 18 pounds pretty easily. But come practice, it got really tough as you can see from the results.

“Traditionally, Murray can get tough in October. I think there was some turnover happening in parts of the lake, but it’s also just that transition where they’re moving off the brush towards the bank, following bait. They’re just in a funk.”

Weather didn’t help matters and heavy rains leading up to the Regional had Crossland, along with other competitors, looking for other ways to get bit across the lake.

“One thing that messed the offshore bite up a little bit was that the water came up,” said Crossland. “We got all that rain up north of us and it came down the Saluda River and blew it out for the most part.

“I knew I was going to fish offshore on brush piles and things like that, so I wanted to look for something else. I looked up shallow and found grass on some deeper points – the first one I caught was like a 4-pounder and I had four more blowups. The river crested just before the tournament and was starting to fall, so I knew I was going to get one day of trying to catch a few on a frog.”

By the time the tournament got rolling on Day 1, Crossland said it didn’t take long for him to realize that offshore fishing was going to be key.

“I had one blow up by 9 o’clock on Day 1 and from there I committed to the offshore thing,” said Crossland. “I ran to a brush pile about 9:30 and it was the first one I stopped on and I got bit – at that point I was committed.”

Fishing drops, brush and points in around 20 feet of water from Buffalo Creek to the dam for the entirety of the event, Crossland said he made about 50 stops the first day but was able to narrow it down a bit over the final two days.

“I burned a lot of fuel and did a lot of running,” said Crossland. “It was a timing deal – sometimes they were there and sometimes they weren’t. I was using Garmin LiveScope, so that gave me the confidence to come back to areas where I didn’t catch a fish simply because I could see they were down there.”

“On the final day I was nervous because the wind was supposed to blow bad and when it blows that hard for me it doesn’t usually work out well. I didn’t have a keeper by 9:30 and the wind was already starting to blow good. I pulled up to a brush pile and I caught my biggest fish of the final day. From there, I just got in my rotation and had a limit by about 12 o’clock.”

Opting for a topwater to call fish up from their offshore haunts, Crossland said he put a Castaic Cowboy in his hand all day, every day. He threw it on a 6-foot, 9-inch medium-action Bulldawg Rod spooled with 12-pound Berkley Trilene Big Game.

Winning a tournament of this caliber on his home pond certainly means a lot to the South Carolina boater, but it meant even more with his friends and family watching.

“I lost my father-in-law, Mike Patsolic, on August 17 to COVID,” said Crossland. “It’s been almost two months but to know he was there with me and proudly watching means a lot. My friends and family were also there, so I had a crowd rooting me on. It’s hard to put into words what it feels like. It still hasn’t really even set in.”

Having a good support system is vital to any tournament angler and Crossland said he is looking forward to representing them all at the All-American next year.

“The All-American is the hardest tournament to qualify for in bass fishing, in my opinion,” said Crossland. “The things you have to do to get there and all the locals you have to beat, it’s just a dream come true.”

The top six boaters that qualified for the 2022 Phoenix Bass Fishing League All-American were:

Rounding out the top 10 boaters were:

Complete results can be found at MajorLeagueFishing.com.

Khris Williams of Mount Holly, North Carolina took home an extra $500 as the highest finishing Phoenix MLF Bonus member. Boaters are eligible to win up to an extra $7,000 per event in each Phoenix Bass Fishing League Presented by T-H Marine tournament if all requirements are met. More information on the Phoenix MLF Bonus contingency program can be found at PhoenixBassBoats.com.

The top six Strike King co-anglers that qualified for the 2022 Phoenix Bass Fishing League All-American were:

Rounding out the top 10 Strike King co-anglers were:

The 2021 MLF Phoenix Bass Fishing League Presented by T-H Marine consisted of 24-divisions devoted to weekend anglers, with 128 tournaments throughout the season and five qualifying events in each division. The top 45 boaters and Strike King co-anglers from each division, along with the five winners of the qualifying events, advance to one of six Phoenix Bass Fishing League Regional Championships.

The top six finishers in each regional will qualify for one of the longest-running championships in all of competitive bass fishing – the Phoenix Bass Fishing League All-American, which will be held June 2-4 at Lake Hamilton in Hot Springs, Arkansas, hosted by the Arkansas Department of Parks and Tourism and Visit Hot Springs.

The top boaters and Strike King co-anglers from each Phoenix Bass Fishing League division will also earn priority entry into the Toyota Series, the pathway to the Tackle Warehouse Pro Circuit and ultimately the Bass Pro Tour.

MLF5 is part of MLF, the world’s largest tournament-fishing organization. It provides anglers of all skill levels the opportunity to compete for millions in prize money across five tournament circuits featuring a five-biggest-fish format. Headquartered in Tulsa, Oklahoma, with offices in Benton, Kentucky, MLF and its partners conduct more than 290 bass-fishing tournaments annually around the world, including the United States, Canada, China, Italy, South Korea, Mexico, Namibia, Portugal, South Africa, Spain and Zimbabwe.