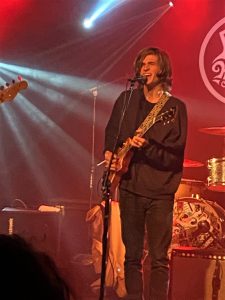 It’s not unusual in Nashville, Tennessee for a child of 6 to begin creating music, as Jesse Shafer did. It is less usual for a Nashville native to migrate his music and life to Charleston, South Carolina, where the complex culture and deep jazz heritage strongly influence his musical growth that was originally predicated on country and folk music.

Shafer’s newest album, Greed, is a result of the blending of the two musical cultures of those cities with his journey of perseverance over clinical depression which began forcefully jolting each day of his life nine years ago.

“I considered postponing the release of Greed, because the pandemic and the racism in America are causing so much pain right now. But this album is precisely about exploring the source of pain and understanding how to move past it. So, I hope it resonates with people, and might even be helpful to some,” Shafer said.

Shafer has lived in Charleston since early 2011, his family leaving Nashville not long after the epic flood of 2010. A senior majoring in Jazz, at the College of Charleston, Shafer plays guitar, bass, pedal steel, piano, and explores experiential music and sound. He performs regularly in Charleston, with the band Inn Vinegar for which he composes, plays lead guitar and sings. In addition, he performs frequently as a solo artist, as a guitarist with jazz vocalist Gillian Kohn, with Wolfgang Zimmerman’s Invisible Low End Power, in a variety of jazz ensembles, and is part of the experimental music group, the Mulberry Collective.

“Greed incorporates classic singer-songwriter and folk forms, but also incorporates the complex instrumentation of jazz. A cellist is featured in some of the songs, along with a trombone and the pedal steel. And two songs on the album are more art for the ear than they are music,” Shafer said.

Shafer has released two solo EPs and a full-length album, Chop the Apple Tree. Inn Vinegar has released a single titled “Cute Little Box,” and the Mulberry Collective has a full-length album on digital music platforms. Shafer can also be found featured on recordings by Honna, Solar Punches, and Nathan and Eva. Shafer played over 150 gigs in the past year and a half, prior to the pandemic. He also studied at the Custom Vibrations School of Lutherie, where he built his own instrument and learned the ins and outs of guitar building and repair.

Greed can be played and purchased on BandCamp, and can be played on Spotify, YouTube and on most streaming platforms beginning June 20, 2020. Follow Shafer on Instagram @shafer.jesse.

To learn more about Shafer, listen to performance clips, or to contact him for an interview or booking, visit www.JesseShafer.com.