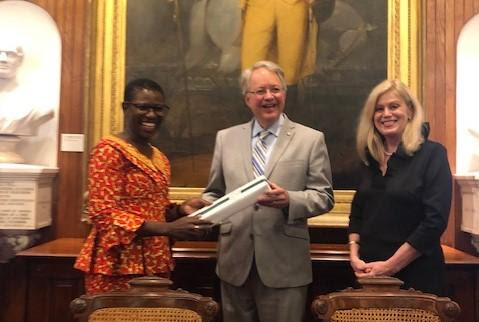 Charleston Sister Cities International (CSCI) is honored to award Her Worship Yvonne Aki-Sawyerr OBE, Mayor of Freetown, Sierra Leone, with the 2021 CSCI Woman of the Year Award in recognition of her leadership and accomplishments.

Charleston Mayor John J. Tecklenburg, who serves as Honorary Chair of Charleston Sister Cities International, together with CSCI President & CEO Neita A. Wiese and members of the Freetown-CSCI Committee, presented Mayor Aki-Sawyerr with the CSCI Woman of the Year Award in a virtual ceremony at 12 noon EDT on April 1, 2021 at Charleston City Hall.

Mayor Aki-Sawyerr serves as the Honorary Chair of the Freetown, Sierra Leone-Charleston Sister City Partnership, which was established in 2019 at the suggestion of then International African American Museum (IAAM) CEO, Michael Boulware Moore, while he was visiting Freetown, Sierra Leone, due to the shared history, heritage, and culture between the two cities. Featured in the ETV series “Gullah Roots: Back to Sierra Leone,” Mayor Aki-Sayyerr spoke about how the Freetown and Charleston Sister City Partnership offers opportunities to deepen existing ties and create new opportunities that are beneficial to citizens of both communities.

Mayor Aki-Swayerr was elected in 2018 following two decades of Public Service. During that time, she campaigned against the practice of “blood diamonds” and successfully advocated to end the war in Sierra Leone. She co-founded the Sierra Leone War Trust to support disadvantaged children and young adults and continues to serve on the Board of Trustees. Recognizing her contributions to the successful Ebola response efforts, his Excellency the President of the Republic of Sierra Leone awarded her an Ebola Gold Medal in December 2015; in January 2016 she was made an Officer of the Most Excellent Order of the British Empire (OBE) by Her Majesty the Queen of the United Kingdom. “The International African American Museum is proud of Mayor Aki-Sawyerr’s achievements and count her as a prized thought-partner and museum Ambassador” stated Brenda Tindal, Director of Education and Engagement, International African American Museum.

Currently, Mayor Aki-Sawyerr is working to transform and improve the lives of Freetonians and to make Freetown an international destination city. Her Transform Freetown strategic plan targets eleven sectors, ranging from tackling environmental degradation and climate change to helping reduce youth unemployment with a focus on empowering women and girls in areas of education and skills development. Melbourne Garber of Freetown and New York, who has worked with Mayor Yvonne Aki-Sawyerr describes her as “one of the most dynamic, progressive and inspirational Mayors that the City of Freetown has ever had and is definitely the right person needed to ‘Transform Freetown’ for the 21st century.”

Neita Wiese stated “The Freetown-Charleston Sister City Partnership is looking forward to collaborating on educational, commercial, cultural, and tourism exchanges and initiatives, as well as sharing resiliency best practices such as managing rising tides as both of our port cities are impacted by severe flooding.”

Mayor Tecklenburg said, “I am honored to help recognize Mayor Aki-Sawyerr for all of the work she is doing to improve the lives of the residents of Freetown, Sierra Leone. Her efforts to provide education and opportunity for all, especially for women and girls, are truly inspiring.”