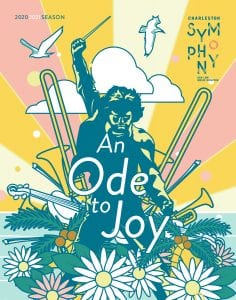 Next season the Charleston Symphony will join orchestras around the world in celebrating the works of composer Ludwig van Beethoven, in honor of the 250th anniversary of his birth later this year.

The CSO’s 2020-2021 Masterworks season, entitled “An Ode to Joy,” will feature one or more of Beethoven’s works at each performance. Throughout the season, the CSO will perform all nine Beethoven symphonies (eight during the Masterworks series and one on Kiawah Island), as well as Beethoven’s “Emperor” Piano Concerto and “Serioso” String Quartet.

“To perform the complete cycle of Beethoven symphonies in a single season is a real musical journey,” according to Ken Lam, CSO Music Director and conductor of the Masterworks series. “I think the orchestra will be significantly challenged. We’re looking forward to it.”

Other season highlights will include Brahms Symphony No. 4, Stravinsky’s Petrushka, and the music of five female composers, chosen in honor of the 100th anniversary of women’s suffrage in the United States. “We hear about composers like Fanny Mendelssohn, Lili Boulanger, and Alma Mahler mainly through their famous siblings or spouses, but their compositions really merit more attention,” Lam said.

Charleston Pops, which presents the CSO’s Pops series, also announced its lineup for the upcoming season. Conducted by Maestro Yuriy Bekker, the season’s performances will include “The Roaring Twenties,” “Once Upon a Time in the West,” “Music of the Movies: In Space,” and the perennial audience favorite, “Holiday Pops.” Due to heavy demand, “Holiday Pops” will again return for two performances.

Subscriptions for the upcoming season are now on sale. The CSO offers season passes to the Masterworks series and the Pops series, in addition to “Pick 6”—an option that allows patrons to mix and match between the two. Masterworks subscriptions start at $184, Pops $92, and Pick 6 $138. To learn more about the CSO’s 2020-2021 season and how you can subscribe, visit charlestonsymphony.org or call 843-723-7528.

This year, the Charleston Symphony Orchestra will enter its 84th season of providing superior musical performances to the area. Founded in 1936, the CSO is the cornerstone of Charleston’s arts scene, performing its Masterworks and Pops series at the Gaillard Center and throughout the tri-county region. Employing 24 full-time musicians and 13 full-time staff, the CSO also participates in numerous community engagement events, special concerts, and school programs throughout South Carolina.