Charleston Tennis, LLC has unveiled Credit One Bank as the new title sponsor of the WTA 500 tennis tournament hosted in Charleston, SC and state-of-the-art stadium located at the LTP Daniel Island tennis center. The tennis tournament, formerly known as the Volvo Car Open, is the largest women’s-only tennis tournament in North America and will celebrate its 50th year April 2-10, 2022 at the newly renovated and modernized Credit One Stadium. A new event name will be revealed at a later date. 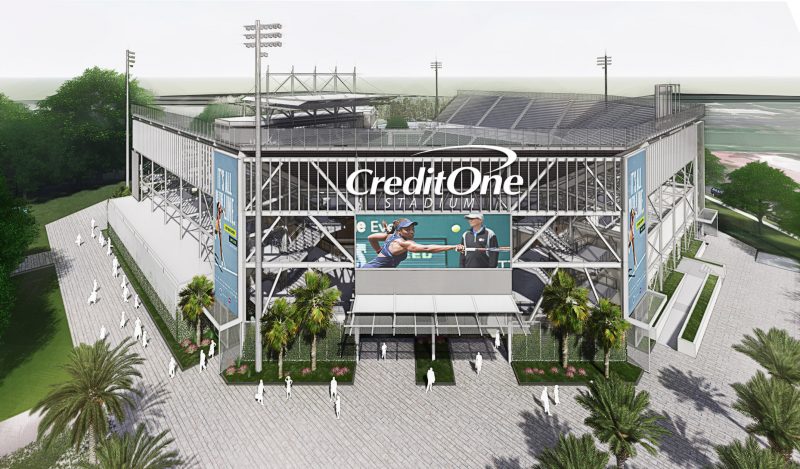 Credit One has committed to a multi-year title sponsorship with Charleston Tennis, LLC. The data-driven financial services company based in Las Vegas is one of the fastest growing providers of credit cards in the United States and has existing sponsorships with sports and entertainment organizations including NASCAR®, the Las Vegas Raiders, WWE® and the Vegas Golden Knights.

“The future of live tennis is a bright spot for us, building and planning for what the future will look like for the new Credit One Stadium. After nearly 18 months of navigating postponements and cancelations, we look forward to bringing world-class tennis back to Charleston each April and broadening our reach to bigger and better concerts and special events throughout the year,” said Bob Moran, president of Charleston Tennis, LLC.

Credit One first partnered with Charleston Tennis, LLC in June of 2020 for the Credit One Bank Invitational, which was part of Tennis Channel’s Re(Open) Tour and the first large-scale tennis event to be held after the sport shuttered due to the COVID-19 pandemic. The tournament featured 16 players, received more than 40 hours of live coverage on Tennis Channel, and helped raise funds for the Medical University of South Carolina’s frontline healthcare workers. Following the success of the event, Credit One and Charleston Tennis, LLC began exploring additional partnership opportunities through sponsorship of the Daniel Island stadium and activation around the tennis tournament and throughout the region.

“We’re proud to be working with Charleston Tennis, LLC, and the City of Charleston to build on the great history of this tournament and give the passionate fan base in the area and women’s tennis players from around the world a great experience at a state-of-the-art venue,” said John Coombe, senior vice president of marketing at Credit One. “We want to grow the Credit One brand name throughout the region while continuing to invest in entertainment and community programs important to our customers and fans.”

Volvo Cars USA will continue to support tennis as the official vehicle of the WTA 500 event. The luxury automobile maker has been a valued partner of the tennis tournament and stadium since investing in the Charleston area with its revolutionary production facility. As part of its commitment to the community, the company devoted six years to the WTA 500 tennis tournament and venue on Daniel Island, serving as the title sponsor from 2016 to 2021.

Since 1973, South Carolina’s WTA 500 tennis tournament has been a pioneer in women’s professional sports, paving the path for female tennis players to receive equal recognition, respect and pay in the sport. Originally held on Hilton Head Island, the event moved to Charleston in 2001 and is played on Daniel Island at the LTP Daniel Island tennis center, home to what will now be called the Credit One Stadium.

“We welcome Credit One to the WTA Tour in its commitment to both serve as the title sponsor of the Charleston WTA 500 tournament and in placing its name on the newly renovated, state-of-the-art stadium in which the event is played,” said Steve Simon, WTA chairman and CEO. “Charleston has a rich history with the WTA as one of the longest standing women’s-only professional tennis tournaments in the world, and is a Tour favorite among the players. We look forward to working with Credit One, along with all of the sponsors, to continue the growth and success of this prestigious tournament for many years to come.”

Charleston Tennis, LLC, which manages the stadium under a lease from the City of Charleston, is currently renovating and modernizing the 20-year-old facility. The city-owned venue is undergoing upgrades to enhance the stadium experience for patrons, performers, tennis players and event management, allowing the venue to attract world-class athletes and talent to Daniel Island.

Credit One Stadium will expand from 7,500 seats to 11,000 seats and feature 16 fully conditioned permanent suites, all-new concessions, more bathrooms and a 75,000-square-foot Stage House with a partial roof. The Stage House will transform the stadium experience for tennis players, entertainers, media and special guests, offering locker rooms, a gym, training facilities, production and media space, catering amenities and a VIP rooftop restaurant and outdoor bar. The roof of the Stage House will also provide partial shade for attendees at the tennis tournament and act as a support structure for concerts and special events.

Charleston Tennis, LLC will continue to own and operate the facilities and event programming at the Credit One Stadium and LTP Daniel Island tennis center, including the WTA 500 tennis tournament, concerts, tennis programs and more.

For more information on Credit One Stadium, visit creditonestadium.com or call 843-856-7900.

About Credit One Bank

Credit One Bank, N.A. is a financial services company based in Las Vegas. Driven by data, Credit One Bank offers a spectrum of products for people in all stages of their financial life including credit cards through the Visa®, Mastercard® and American Express® networks. Founded in 1984, Credit One Bank is one of the fastest-growing credit card providers in the United States. Credit One Bank is the Official Credit Card of NASCAR®, the Las Vegas Raiders, the Vegas Golden Knights, and Best Friends Animal Society®, and is a proud partner of WWE® and Six Flags®. Learn more at CreditOneBank.com and on social media (@CreditOneBank) on Facebook, Instagram, Twitter, YouTube, and LinkedIn.