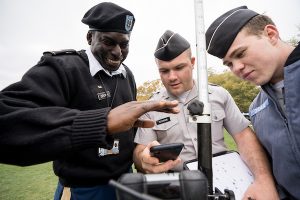 The Citadel School of Engineering, consistently ranked as one of the top engineering schools in the country, could not achieve that status time and again without prominent industry faculty leading the way. The results of the 2020 American Society of Civil Engineers (ASCE) awards for the state of South Carolina underscore that point.

Announced in July, the awardees include two faculty leaders, an alumnus, and a project that alumnus helped lead.

“Dr. Welch has accumulated a highly regarded national reputation for academic excellence continues to play an instrumental role in direction of ASCE’s Project ExCEEd (Excellence in Civil Engineering Education), and is a recognized leader in ASEE (American Society of Engineering Education) Civil Engineering Division. He has served in academic appointments in higher education over 29 years including faculty and leadership positions at U.S. Military Academy, University of Texas at Tyler, and The Citadel. His career includes 25 years of service as an Officer in U.S. Army rising to the rank of Colonel, prior to his retirement from the Corps of Engineers in 2007.

His career includes 25 years of service as an Officer in U.S. Army rising to the rank of Colonel, prior to his retirement from the Corps of Engineers in 2007. Since his arrival at The Citadel in 2011, Dean Welch has served as a forward-thinking leader of higher education in our state. As a testament to his vision, two new undergraduate degrees were added to The Citadel School of Engineering including Mechanical Engineering and Construction Engineering. Additionally, he led creation of Master of Science degree programs in Civil, Mechanical and Electrical Engineering. Through Dean Welch’s strategic leadership, The Citadel’s School of Engineering enrollment has risen to 700 students, comprising approximately one-third of the college’s degree seeking students.” William J. Davis, Ph.D., P.E., Dept. Head and D. Graham Copeland Professor of Civil Engineering, The Citadel

In addition to leading the The Citadel School of Engineering, and continuing to teach Civil Engineering cadets and students, Welch has worked as a servant leader in numerous voluntary leadership positions throughout his career. Examples include serving a board member for Engineers Without Boarders and serving ASCE in leadership roles for more than 20 years, including as a program developer and mentor.

Some of Welch’s other awards include:

“Dr. Kweku Brown is an Assistant Professor in Civil and Environmental Engineering at The Citadel. His well-founded educational approaches and effective teaching methods are benefiting students, contributing to the quality of our Department’s learning environment, and embodying the highest ideals of The Citadel’s mission, as a teaching institution.

His ability to create and support productive student-learning environments is phenomenal. Through his great work ethic and collaboration, he exemplifies how engineers can work together to strive for the highest standards of excellence. He passed his PE exam in 2020 and is in the process of submitting his application.” William J. Davis, Ph.D., P.E., Dept. Head and D. Graham Copeland Professor of Civil Engineering, The Citadel

In 2019, Brown taught 12 sections of 8 Civil Engineering Courses, was selected as a national delegate for the Minority Faculty Development Workshop at Harvard University, and participated in 27 Citadel events and initiatives including Leadership Day and Student Excellence Day. In addition, Brown currently serves as a faculty Advisory for the student chapters of ASCE, the National Society of Black Engineers, and the Institute of Transportation Engineers.

Brown’s most recent research appointments and recognition include:

Brown received his Civil Engineering Bachelor’s degree from the Kwame Nkrumah University of Science and Technology in Ghana. His Master’s degree and Doctoral degree were obtained from the University of Connecticut and Clemson University, respectively. Brown is a member of both the National and South Carolina Section of the Institute of Transportation Engineers (ITE).

Engineer of the Year
Jim O’Connor, The Citadel Class of 1989, JMT engineering, Charleston

A Charleston area JMT executive, and a JMT project, have been honored by the American Society of Civil Engineers (ASCE) South Carolina Section. Jim O’Connor, PE, CEng MIEI was named Civil Engineer of the Year, and JMT’s I-26/Volvo interchange design-build project was selected as Project of the Year.

Jim O’Connor is a 1989 Citadel graduate and Vice President in JMT’s Charleston office who is both responsible for the firm’s South Carolina operations and actively participates in complex projects. He also holds an MS from Rutgers University and is a professional engineer in several states, including being a Chartered Engineer in the Republic of Ireland. As an active ASCE member, he serves as a Practitioner Adviser at The Citadel and is a member of the Civil Engineering Department’s Advisory Board.

As an accomplished structural engineer, O’Connor contributed to the success of several key projects that are helping reshape the infrastructure in South Carolina’s Lowcountry including the award-winning I-26/Volvo interchange, the Port Access Road/I-26 interchange, the historic Low Battery reconstruction, and the Nexans Marine Terminal in the Goose Creek Bushy Park complex.

Delivered to the South Carolina Department of Transportation (SCDOT) in 2019, the new I-26/Volvo Interchange provides critical access from a regional Charleston interstate highway to Camp Hall Commerce Park and the Volvo manufacturing facility. As the lead design firm on this project, JMT provided overall project management along with bridge and roadway design, and environmental services in support of the contractor, Conti Enterprises, Inc. The successful delivery of this project has added substantial value to the greater Charleston coastal community and the state of South Carolina. (Provided by JMT)