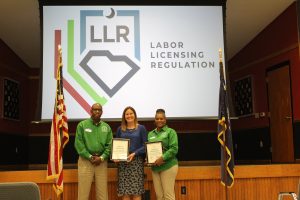 The City of Columbia Public Works Department and Public Administration Department were recognized as recipients for their outstanding safety performance at the 2021 Safety Achievement Awards on Wednesday, July 21, 2021.

Both departments earned the Palmetto Shining Star award, the highest safety honor given by the South Carolina Labor, Licensing & Regulation and SC Occupational Safety and Health. To achieve the award, a company or organization has to reduce its Recordable Incident Rate, or RIR, by 20 percent. Safety & Risk Management Director H. Demetrius Rumph says the achievement showcases the hard work by City leadership and employees.

“It’s really the boots on the ground and the leadership that deserves all the applause,” Rumph says. “If it wasn’t for them, we would not be here. To be able to reduce your recordable incident rate by 20 percent from the previous year says a lot.”

The Department of Public Works launched a safety campaign to incentivize employees to identify hazards and implement corrective action. Through the campaign and other measures, the department saw a 31 percent reduction in its RIR between 2019 and 2020. The Department of Public Administration had a 55 percent difference in their Recordable Incident Rate compared to the South Carolina 2019 average RIR. The department developed safety videos to focus on safety awareness and reducing exposure risk and included a safety criterion in employee evaluations.

Along with the two departments honored, Rumph says the City as a whole deserves praise for reducing its incident rate by 18 percent. The City also was one of two municipalities to be recognized out of the 46 countries within South Carolina. Rumph says the City is setting the bar regarding safety achievement. He wants employees to take a bow and know they’ve been able to provide services and needs to the public while maintaining safety.

“A lot of people say shoot for the moon and you will be among the stars or the sky is the limit,” Rumph says. “But I always say the sky is the view. It’s never a limit, and today we proved that.”